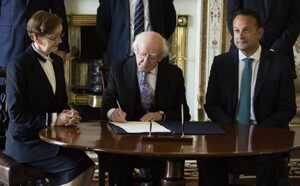 The letter, which is confidential and known as a “warrant of appointment”, insisted President Higgins ratify Ms Whelan’s role in the appeals court immediately.

The unpublished letter is understood to have included a “specific” demand that the appointment be made on Monday morning, despite the fact the timeline had until then not been the subject of any discussion.

While no formal reason was included in the letter explaining the schedule being sought, sources close to the process said they believe the timeline was put forward to ensure the position was set in stone before any Dáil or Cabinet criticism today.

Yesterday: With The Stroke of A Pen