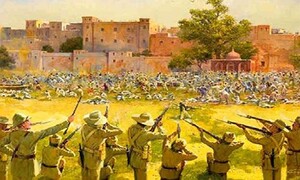 #OnThisDay 1919 The British Indian Army fired on unarmed civilians killing 379 & wounded 1200 in the Amritsar Massacre. Ordered by Reginald Dyer, educated in Midleton, Cork & was supported by the Governor of the Punjab, Sir Michael O’Dwyer, from Tipperary.#Ireland #History pic.twitter.com/CmTRIt3ixC