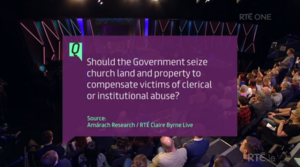 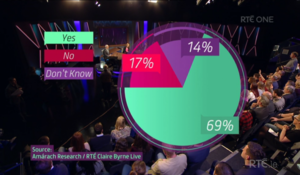 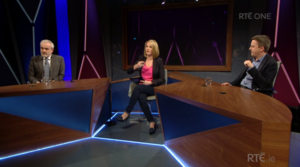 From top: The results of a poll on last night’s Claire Byrne Live which was attended by Colm O’Gorman and David Quinn (third pic) and Michael O’Brien, above

Colm O’Gorman, of Amnesty Ireland, and Irish Independent columnist David Quinn, of Iona Institute, joined Claire Byrne for a debate on the Catholic Church and the State.

Members of the audience also spoke, including Michael O’Brien, who, in 2009, spoke on Questions and Answers about the abuse he suffered at an industrial school and how he was told he was telling lies at the Laffoy/Ryan Commission.

Donald Clarke, of The Irish Times, also spoke from the audience recalling a column he wrote on June 7, 2014, headlined: ‘If you don’t approve of the church then don’t take part in its rituals’.

Readers may wish to note that the latest Census figures for religion won’t be available until October 12.

Michael O’Brien: “All we have is denial, denial, denial. And the one thing that I will propose: that the assets of the Catholic Church be frozen and frozen now. Until the mother and babies, the institutional abuse, the clerical abuse and the magdalene laundries – all that is sorted out for once and for all so that this country can move, as it did years ago, as a peaceful country. And not for us to be listening, day after day, day after day. Because when you talk about abuse, I feel, as if it only happened to me a few minutes ago. And this is the problem we have.”

“The Catholic Church has denied and denied and covered up, from the first day. And not one Bishop, not one who covered it up has been brought into one of our courts.”

O’Brien: “I can’t believe the Taoiseach any more because I remember when they removed the ambassador from the Vatican – a big hullaballoo. What did he do? He sent him back again. He put an ambassador back in there again. And went soft on the church. And because the mother and babies [story] came, this disgrace upon all of us, a shame upon all of us, that this thing happened, he now, again, is battering, shouting at the church.”

Byrne: “I just don’t want to put David in a position where he’s seen as a denier because he is not.”

Gorman: “It might be useful for me to say something and I completely understand where Michael’s anger and upset and I think it’s quite righteous where it’s coming from. But I do just want to say David [Quinn] and I were talking earlier on about the first time we were in a  television studio and on that occasion David was advocating for the church to sell off every asset the church possessed until it properly compensated and dealt with these issues. So…”

Gorman: “So, to be fair, David’s been clear. David and I don’t agree on a very significant number of things but, to be fair, he’s also looked for, he’s generally looked for accountability on these issues.”

Byrne: “And I’m glad you made that point. We did ask out Claire Byrne Live/Amarach research panel: should the Government seize church land and property to compensate victims of clerical or institutional abuse – 69% said yes and 17% said no, 14% don’t know. Which is interesting. Because only in the last couple of hours, Minister Leo Varadkar says that property cannot be seized and that, if we ran a referendum on it, that that referendum would be lost. I know that Simon Harris suggested that, over the weekend, that perhaps we could do that. I don’t know, David, if you have a view of that.”

Quinn: “I mean it’s extremely likely it would be lost because you, you’d have to change the constitution in such a way that you make it easy for the State to seize property and, you know, it wouldn’t just be the church that would be affected. Basically, you’d give the State incredibly sweeping powers to seize property. Obviously, in terms of the compensation scheme,  the 18 orders around the institutions must contribute their fair share and so the Comptroller and Auditor General released a report and so, if they’re not paying their fair share. Mind you, it also showed, of the 18 orders, most have paid what they said they’d pay and it’s important to put that on the record. The two, which are the biggest ones, which are the Christian Brothers the Mercy sisters, who ran most of the country’s institutions, they have yet to meet their obligations. I hope that happens in time. It ought to happen in time.”

Previously: Did Your Nan Leave Money To The Nuns? 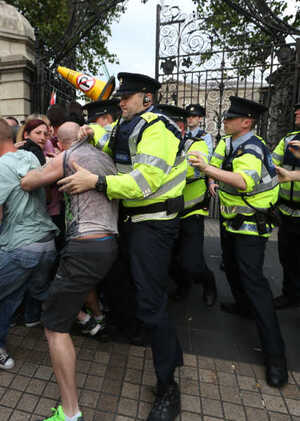 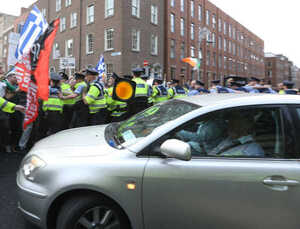 Further to the melee outside the Dáil last night,

On the matter of the female garda, this is what both contributors said:

Senator Mary Moran: “I must say the the scenes last night were nothing short of horrific, Sean, as I was leaving Leinster House. A female garda standing close to my car last night, it was unbelievable, traffic cones came across the car and hit the girl who was standing in a protective cordon and she dropped like a ton of bricks on to the ground. Now that was absolutely horrific, she was knocked unconscious. To me what was absolutely worse, after that was the fact that people seemed to think that this was funny and came up and started videoing it and laughing around it. I mean that girl was, seriously, to see somebody crumble. You know standing one minute and lying unconscious in the next minute was absolutely unacceptable I think last night.”

Anti Austerity Alliance Councillor Michael O’Brien: “I didn’t see the garda collapsing. I did see a cone travel over the garda lines and land on the car. That much I did see. I did see the garda in question being led in to an ambulance some half an hour after the incident and I don’t stand over the throwing of  objects whatsoever.” 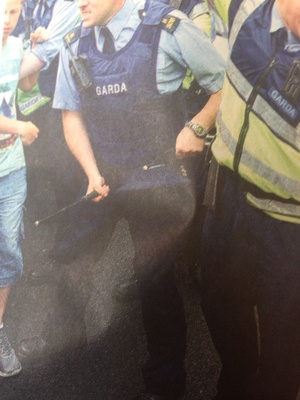 This photo is from last nights water protest outside the Daíl! Garda deploying Baton Penis with sex face and hip thrust