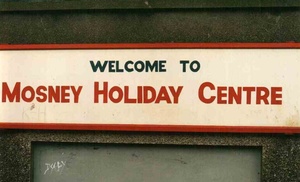 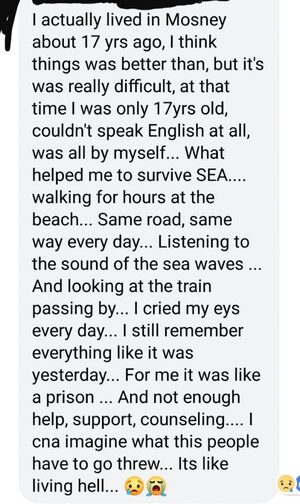 A lady who lived in Mosney Direct Provision centre 17 years ago shares her experience. “For me it was like a prison” 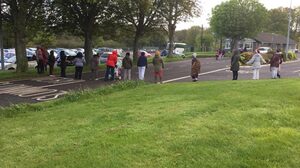 Outside the Direct Provision centre in Mosney, Co Meath

Some residents of the Direct Provision centre at the former Mosney holiday camp in Co Meath are holding a protest.

It follows a single mother reportedly attempting suicide at the centre.

Yesterday, the Movement of Asylum Seekers in Ireland posted the following on Facebook:

Not very long ago, a man living in the Hazel Hotel Direct Provision centre in Kildare died as a result of suicide.

His roommates and friends tried to get help for him and their attempts were met with a government that is uninterested in the wellbeing of people living in Direct Provision centre.

With a prevailing sense of hopelessness, the man took his life. He was not the first person to do so in a Direct Provision centre.

And considering that the State gives people antidepressants or sleeping pills instead of addressing the causality of untenable limbo in the system, it would be naive to think that he’d be the last person to do so.

A single mother who has only been in Ireland for a few weeks is in hospital after attempting suicide in the Mosney Direct Provision centre.

The mother arrived in Ireland with her 5 year old son. A few days ago, her other 2 children, a 16 year old boy and an 11 year girl joined her.

She was to remain in Mosney Direct Provision centre while her asylum claim is processed. However, she was advised by staff in Mosney that they do not have space to accommodate the family of 4 and so they were shipped off to a hotel in Cavan.

The hotel in Cavan gave the family a standard hotel room where all 4 were expected to live.

The teenage boy required medical attention and there was no assistance provided in the hotel.

Concerned for her child’s life, the single mother left the hotel in Cavan and went back to Mosney where she’d at least have staff assist with getting help.

Since international protection applicants are new to Ireland and as such are unfamiliar with how things work, staff in Direct Provision centres are to display all the relevant emergency contact details and call for emergency services when the need arises.

There was no one to point her in the right direction so she contacted the International Protection Office and informed them that she was returning to Mosney.

She was met with hostility from one staff member in the centre who shouted at her, telling that she needs to take her children and go. The mother did not leave.

The staff member then told her that she wouldn’t get food and care for her sick child. The distressed mother reported the matter to Tusla.

Other residents in the centre contacted a local councillor who spoke with management and a house that can accommodate the family magically appeared in the same Mosney they had claimed had no space for her. The mother is in hospital after attempting suicide.

When a child or resident in Reception and Integration (it should be incarceration) Agency accommodation needs medical attention, the staff are required to organise transport to a healthcare facility as most Direct Provision centres aren’t accessible by public transport.

Here you have a case of a family being shipped around without reason as means of punishment for complaining.

Other residents MASI spoke to are fearful and reluctant to raise issues they have with management because the minute a person complains, they are moved to another centre.

Such is the case of the man who was transferred from Mosney to Longford after an altercation in the centre.

Three children could’ve lost their mother to suicide because of staff in Direct Provision centres who treat people like a Yoyo, moving them around at will.

Other residents are terrified to raise any concerns they have because they could be uprooted anytime to a place that is worse than the one they are currently in.

MASI calls on the Department of Justice and Equality to abolish the abhorrent system of Direct Provision and treat people with dignity.

After 20 years and many suicides, we’re tired of mourning asylum seekers who are pushed to limits by staff who do not respect their right to dignity.

Ireland used to treat international protection applicants humanely. Surely someone in the Irish government knows how to vindicate fundamental human rights for everyone in Ireland. And we encourage Irish people to contact their elected representatives and tell them to #EndDirectProvision.

Residents may stage a protest and would welcome support from people living close to Mosney.

1/3 Mosney owner Phelim McCloskey tells women protesting their conditions in Direct Provision "this will have an impact on you". Mr. McCloskey is worth over €45m. The women are living in a very precarious situation as they await judgement on their asylum claims… pic.twitter.com/akHnw1ryBQ 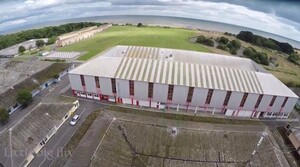 This used to be our playground.

The stab-lite and fondly-recalled Homelands in Mosney, Co .Meath in 1999.

That’s how you do it.