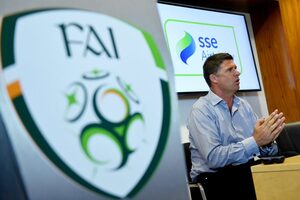 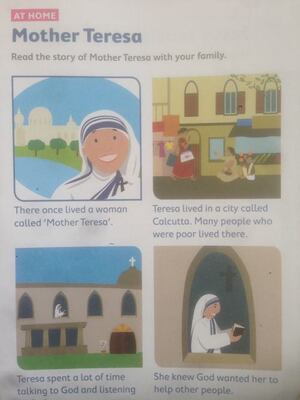 The other night I was putting the school textbooks into the children’s bags and I opened up the Senior Infants textbook ‘Grow in Love’. It is a religious education book. It cost us €8.99.

Earlier in the day I had read posts from people who were – rightly, in my view – incensed that the State broadcaster RTÉ had shown live Mother Teresa’s induction into Heaven’s Hall of Fame.

Well, here’s what they teach 5 year olds in Ireland’s state-funded schools in 2016, so it’s not as if RTÉ was doing a solo run on this.

Just as you pay your licence fee to RTÉ so that it tells you why you need to give up your auld sinful attachments to pensions and universal benefits, you also pay for your children to learn to admire someone who thought the poor accepting their lot was a beautiful thing.

But it doesn’t stop there: the child is supposed to read it with her family. So you are, in fact, paying for your child to proselytise to you about the virtues of charity… 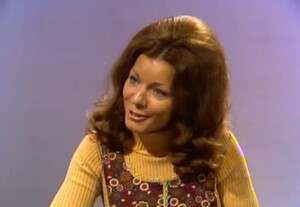 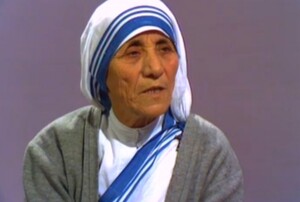 There was Nodlaig McCarthy presenter of This Week.

In this, another selection from RTE Player to mark the station’s 50th anniversary, Nodlaig interviews Mother Teresa in the Summer of 1974.

And by ‘interview’ we do mean literally the most trembling, fawning encounter you are likely to see outside of the Vatican. We’re only glad Christopher Hitchens is not alive to see it.