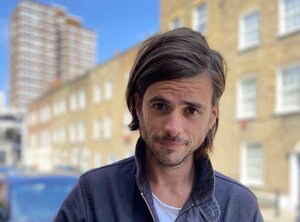 Musician Winston Marshall (above) who has left the band Mumford & Sons

At the beginning of March I tweeted to American journalist Andy Ngo, author of the New York Times Bestseller, Unmasked. “Congratulations @MrAndyNgo. Finally had the time to read your important book. You’re a brave man”. Posting about books had been a theme of my social-media throughout the pandemic. I believed this tweet to be as innocuous as the others. How wrong I turned out to be.

Over the course of 24 hours it was trending with tens of thousands of angry retweets and comments. I failed to foresee that my commenting on a book critical of the Far-Left could be interpreted as approval of the equally abhorrent Far-Right.

Nothing could be further from the truth. Thirteen members of my family were murdered in the concentration camps of the Holocaust. My Grandma, unlike her cousins, aunts and uncles, survived. She and I were close. My family knows the evils of fascism painfully well. To say the least. To call me “fascist” was ludicrous beyond belief.

I’ve had plenty of abuse over the years. I’m a banjo player after all. But this was another level. And, owing to our association, my friends, my bandmates, were getting it too. It took me more than a moment to understand how distressing this was for them.

Despite being four individuals we were, in the eyes of the public, a unity. Furthermore it’s our singer’s name on the tin. That name was being dragged through some pretty ugly accusations, as a result of my tweet. The distress brought to them and their families that weekend I regret very much. I remain sincerely sorry for that. Unintentionally, I had pulled them into a divisive and totemic issue.

Emotions were high. Despite pressure to nix me they invited me to continue with the band. That took courage, particularly in the age of so called “cancel culture”. I made an apology and agreed to take a temporary step back.

Rather predictably another viral mob came after me, this time for the sin of apologising. Then followed libellous articles calling me “right-wing” and such. Though there’s nothing wrong with being conservative, when forced to politically label myself I flutter between “centrist”, “liberal” or the more honest “bit this, bit that”. Being labeled erroneously just goes to show how binary political discourse has become. I had criticised the “Left”, so I must be the “Right”, or so their logic goes.

Why did I apologise?

“Rub your eyes and purify your heart — and prize above all else in the world those who love you and who wish you well.” — Aleksander Solzhenitsyn once wrote. In the mania of the moment I was desperate to protect my bandmates. The hornets’ nest that I had unwittingly hit had unleashed a black-hearted swarm on them and their families. I didn’t want them to suffer for my actions, they were my priority.

Secondly, I was sincerely open to the fact that maybe I did not know something about the author or his work. “Courage is what it takes to stand up and speak,” Churchill once said, “courage is also what it takes to sit down and listen”. And so I listened.

I have spent much time reflecting, reading and listening. The truth is that my commenting on a book that documents the extreme Far-Left and their activities is in no way an endorsement of the equally repugnant Far-Right. The truth is that reporting on extremism at the great risk of endangering oneself is unquestionably brave. I also feel that my previous apology in a small way participates in the lie that such extremism does not exist, or worse, is a force for good.

So why leave the band?

On the eve of his leaving to the West, Solzhenitsyn published an essay titled ‘Live Not By Lies’. I have read it many times now since the incident at the start of March. It still profoundly stirs me.

“And he who is not sufficiently courageous to defend his soul — don’t let him be proud of his ‘progressive’ views, and don’t let him boast that he is an academician or a people’s artist, a distinguished figure or a general. Let him say to himself: I am a part of the herd and a coward. It’s all the same to me as long as I’m fed and kept warm.”

For me to speak about what I’ve learnt to be such a controversial issue will inevitably bring my bandmates more trouble. My love, loyalty and accountability to them cannot permit that. I could remain and continue to self-censor but it will erode my sense of integrity. Gnaw my conscience. I’ve already felt that beginning.

The only way forward for me is to leave the band. I hope in distancing myself from them I am able to speak my mind without them suffering the consequences. I leave with love in my heart and I wish those three boys nothing but the best. I have no doubt that their stars will shine long into the future. I will continue my work with Hong Kong Link Up and I look forward to new creative projects as well as speaking and writing on a variety of issues, challenging as they may be.

Hanging out with Mumford & Sons in #Galway ahead of their gig in Salthill on June 9th. twitter.com/garrykelly/sta…

Winston Marshall of the Mumfords promoting the band’s June concert in Galway – by reading Irish off a brown envelope. Ouch.