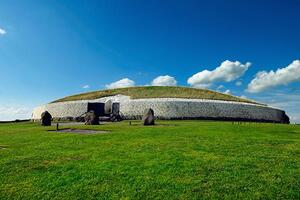 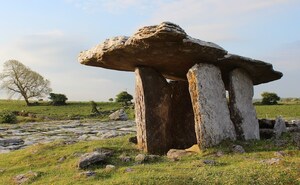 The authors’ findings address key issues, such as the insularity of Ireland’s Mesolithic population, the immigration of Neolithic farming groups and the farmers’ relationship with the indigenous Irish Mesolithic fisher-hunter-foragers.

…The genetic data obtained from human remains dating to around 4700 bc (from Killuragh Cave, County Limerick, in southwest Ireland) and to around 4100 bc (from Sramore Cave, County Leitrim, in the northwest and Stoneyisland, County Galway, in the west) are the first DNA results for Ireland’s hunter-fisher-forager groups.

These Mesolithic Irish people were genetically distinct from their Mesolithic neighbours across the Irish Sea in Britain, suggesting a prolonged period of genetic isolation after these people sailed across to Ireland around 8000 bc.

..analysis of remains from Poulnabrone portal tomb (a single-chamber monument with a huge capstone and tall entrance stones) in County Clare, western Ireland, reveals the appearance of new genomic signatures.

This indicates the arrival in Ireland of people from elsewhere, from at least as early as 3800 bc, and is consistent with the idea that farming was brought to Ireland by immigrants.

[the] report has many other fascinating insights, including data on the probable skin, hair and eye colour of the ancient individuals, and the world’s earliest definitive evidence (dated to 3629–3371 bc) for a case of Down’s syndrome — in an infant boy, buried at Poulnabrone portal tomb.

…there are also contentious issues, not least the use of social-evolutionary terminology. For example, it is questionable to characterize the society of those responsible for building the major Brú na Bóinne passage tombs as possessing attributes found in early state societies and their precursors, with all that that implies in terms of bureaucracy, centralized power structures and so on.

Moreover, in emphasizing the genetic affinities between Irish and British Neolithic farmers and those in Iberia (Spain and Portugal), the authors seem to fall into the trap of assuming that Ireland’s farmers had sailed up from Iberia — an argument for which there is no archaeological evidence….