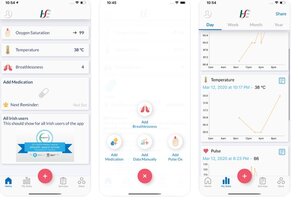 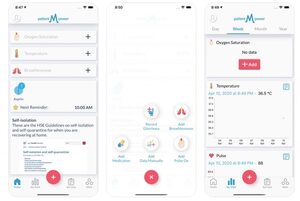 From top: How a HSE COVID-19 “Patient Management” app looked as of last Friday evening on the Apple Store; how it looks now

The Sunday Times reported that, on Saturday, the company behind a separate HSE app which tracks the oxygen saturation of Covid-19 patients, and which has been advertised on Apple Store for over a week, has removed its HSE branding.

Yesterday PatientMPower, a company that has developed a clinical app for suspected Covid-19 cases — one that works with a pulse oximeter to track oxygen saturation of patients — removed all HSE branding from it on the Apple app store. Sources say this was to avoid confusion with a forthcoming HSE tracing and symptom tracker app.

The HSE said the solution provided by PatientMPower “facilitates the remote monitoring of patients who have been provided with an oximeter to monitor the level of oxygen saturation in the blood for Covid-19 patients”. The oximeter and access to the app is provided by clinicians.

“While the app can be downloaded, patients must have a username and password to use it. We have worked with PatientMPower to update the branding used for this existing app, to avoid any confusion with the CovidTracker Ireland app due to be released soon, so both are easy to identify,” it added.

The use of the PatientMPower app by a specific patient recovering from Covid-19 also briefly featured in reports on RTÉ’s Six One and Nine O’Clock News yesterday evening.

In The Guardian this morning…

A draft government memo explaining how the NHS contact-tracing app could stem the spread of the coronavirus said ministers might be given the ability to order “de-anonymisation” to identify people from their smartphones, the Guardian can reveal.

The health secretary, Matt Hancock, announced on Sunday that the UK planned to introduce an app that would enable people who developed Covid-19 symptoms to “anonymously” alert other users to whom they had been in close proximity. “All data will be handled according to the highest ethical and security standards, and would only be used for NHS care and research,” he said.

However, the government document seen by the Guardian, headed “official – sensitive” and “draft – not yet approved”, suggests the NHS privately considered using the technology to identify users.

…the memo stated that “more controversially” the app could use device IDs, which are unique to all smartphones, “to enable de-anonymisation if ministers judge that to be proportionate at some stage”. It did not say why ministers might want to identify app users, or under what circumstances doing so would be proportionate.

Previously: The CovidTracker App And You