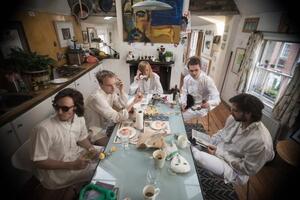 02. They’ve since been busy working on the next step, with new E.P. Kiss Yourself due out November 18th, and a rake of gigs to follow.

03. Streaming above is the band’s new single Know My Name, premiered today at Clash Magazine. Video directed by Brendan Corcoran.

04. It’s the first single from the upcoming E.P. Preorder it digitally here, and on wax here. They’ll be touring in the run-up to launch, starting October 1st at Nelliefred’s in Dingle, Billie Byrne’s in Kilkenny on the 7th, Connolly’s of Leap on the 8th, and the Roisín Dubh in Galway on the 15th, ahead of a short run to the UK and Iceland for Hallowe’en and early November.

VERDICT: If they hadn’t transcended the norms of post-genre labelling and pigeonholing before, they certainly have now, with powerful pop songcraft and a keen sense of dynamic.