Dublin Zoo is delighted to announce the arrival of a southern white rhinoceros calf. The male calf, who is yet to be named, was born to mother Ashanti and father Chaka at 1.45pm last Thursday and weighs approximately 60kgs.

The youngster joins the rest of the herd – Sam, Reni, Chaka, Zanta, Nyala and of course his mother Ashanti (top left) – at the African Savanna.The newborn is Ashanti’s fifth calf and is another significant success for Dublin Zoo as part of the European Endangered Species Programme established to assist the survival of the near threatened southern white rhinoceros….

…The children of Ireland are invited to suggest a name for the newest arrival based on his African origin. Name suggestions can be submitted here… 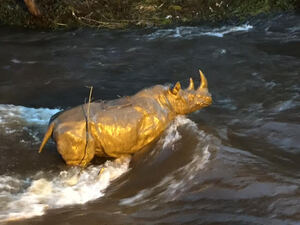 On tonight’s episode of The Zoo on RTE One at 7pm.

“Four-week-old rhino calf Jabari meets his father Chaka for the first time on this week’s episode of ‘The Zoo’. The animal care team are delighted to witness the young calf greet his dad as he ventures on his first clumsy run through the African Savanna. The youngster playfully spars with his giant dad as the animal care team look on with happiness at how well this important first meeting went.”

We gather together to mourn,
An object which used to adorn,
The home of a dancer,
Before some low chancer,
Got his hands on the poor fellow’s horn.

Go on, get a sheet of paper. You know you want to.