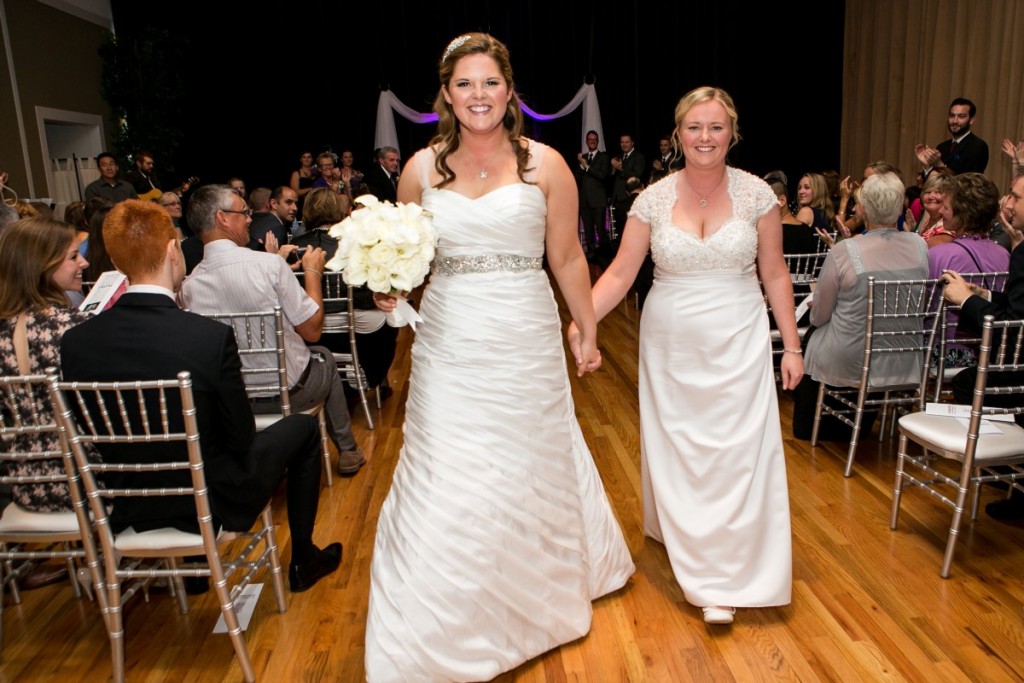 Roisín Hughes and wife, Kristen (above), walking down the aisle.

Ahead of Friday’s Marriage Referendum, Bray (County Wicklow) native Roisín Hughes, now in Chicago, U.S.A., shares her story in a bid to sway the undecided and inspire the don’t knows.

One thing is certain: May 22nd is a date that I will never pass over arbitrarily as I flick through my ’30 Rock’ desk calendar — my niece, who turns six on that date this year, will make sure of that. I can only hope that the date will be special to me for years to come in another way as well. Time, dates, days…they are funny little things.

A mere decade ago, I was a third year college student, enjoying the typical antics that are associated with university life in Dublin, Ireland: surrounded by fantastic lifelong friends, playing field hockey at college level, holding my head above water at exam time, and generally living what most would consider a wonderful life. I was also living a wonderful lie. Since my early teens, I had been fairly certain that I was gay.

For those unfamiliar, the best way to describe the day-to-day impact of shielding that lie is this: Every time something truly amazing happened in my life, (and many things did, I consider my adolescence to have been a very happy and fulfilling one), that lie tapped me on the shoulder, reminding me that nothing was quite as fantastic as it seemed.

Each time a sad situation arose, it was even more difficult to surmount because of the dark cloud of lies I told myself and everyone I loved every day. Every time one of my siblings brought a significant other home, I felt a tremendous ball of sadness in the pit of my stomach: A sadness borne of jealousy, fear, and shame.

Every time a scandal broke out in my small town, nothing seemed to compare to the wrath of my own private scandal. There were some dark days during those years. I had resigned myself to the fact that I would do one of two things: Marry a boy that I got along well with, avoid physical contact with him at all costs and hope that our mutual obsession with all things sport-related would get us through the decades of companionship; or die a spinster and possibly adopt some cats (I hate cats).

In 10 short years, the LGBT equal rights movement has witnessed an avalanche of progress. To bring the countless court victories and law amendments down to a personal level, consider this: On this day, I calculate that it has been over 8 years since I felt any semblance of that lie tap my shoulder. What a feat! Would-be husbands! Cats! You’re all safe!

Consider the shifts: My shame has been replaced with a beaming pride. My years spent in fear at my all-female Catholic school have been usurped by four years working for the greatest, most inclusive company in the world, Salesforce.

My CEO, Marc Benioff, recently took to Twitter to take a stand against Indiana’s ‘Religious Freedom’ Law. My brother, Mike, has recently become heavily involved in Procter & Gamble’s LGBT ally program, GABLE. The emails that he sends me about his participation and support of that group bring a lump to my throat without fail.

Nine months ago, I wed my best friend, the love of my life, Kristen. As the Irish would say: I did well for myself. She’s gorgeous, inside and out, a gem of a human being.

A 100 of our close family and friends traveled from Ireland and Iowa to Chicago last summer to witness and partake in our wedding. My Dad walked me down the aisle just as he had my two straight sisters previously.

It was a wonderful occasion, the best of my life, one that I had not imagined could occur until very recently — the same applies to the Marriage Equality referendum in Ireland. I remember speaking with my gay brother, David, who is 2 years my elder, shortly after we had both come out to each other.

At the time, our options were incredibly limited when it came to planning a future — the Netherlands was the only country in which we could have married our partners. Most of our extended family and friends were still unaware of the fact that we were gay — the idea of sending them a wedding invitation was unfathomable. Maybe in 2050 New York…Possibly progressive Germany… Ireland? Not a chance. Not in our lifetime.

Living in Chicago, I can’t cast a ballot on Friday, May 22nd. So, to all those in a position to have their say later this week, I ask you this: Allow me to call my ‘wife’ my wife when I move back home someday.

By casting a Yes vote, you will be tapping teenagers’ shoulders all over the world, letting them know that it’s ok, and it’s going to be ok. Allow our little island to be the first country to pass this law of equality by popular vote. Be on the right side of history. #BeMyYes