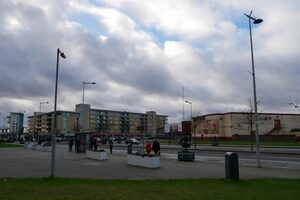 “Yeah. We’ve no pubs in Ballymun,” says [Patricia] Mulready. “No pubs and no shops.”

Both women say the fact that the last pub is now done is symptomatic of the wider malaise in the town, where social life for all age groups has been hollowed out.

“No shops, no pubs, no entertainment for the kids, we’ve to go on the bus to the bingo,” says Neeson. “There’s nowhere to socialise.”

“This is why the young fellas are getting into trouble,” says Neeson. They’ve nothing to do.”

. . . “A good-quality pub with food, and a meeting space, is seriously lacking in the town, and is important for both business and social life, [Head of Ballymun4Business Robert Murphy] says.

Nicola Keating, who lives locally and works in the Axis centre, just across the square says she agrees with Murphy.

“There was a big theatre show on recently in Axis, she says. The actors asked after where they could go for a drink, and maybe a bite to eat.

“We kept them here and we gave them drink here but we couldn’t feed them. Well, I gave them crisp sandwiches,” says Keating. “It’s embarrassing.”

Come and talk to us! We’ll be at the Rediscovery Centre in Ballymun from 10am this Saturday 22 June for a couple of hours. If you’re in that neighbourhood, we’d love to have you drop by, and tell us what needs more coverage, or talk about ideas for collaborative journalism.