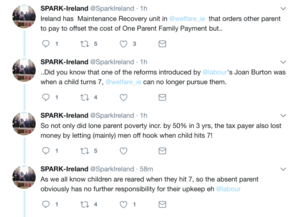 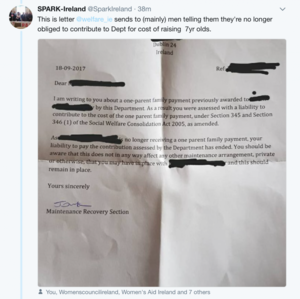 So @joanburton who exactly did your reforms help? Not the taxpayer, not children or their parents but the parents who don’t want to pay! 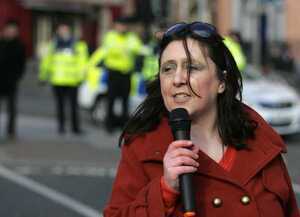 This afternoon , SPARK (Single Parents Acting for the Rights of Kids) are delivering a post-budget submission to Oireachtas members and a petition to Minister for Social Protection Leo Varadkar.

Many people believe that losing One Parent Family Allowance when a child turns 7 is a good thing and point to international norms where parents can lose this support when a child turn 3 or 5.

However, the reality is that the changes only had a financial impact on lone parents in work or education and this is completely in contrast to international practice.

In the UK for example, a lone parent working 12 hours per week is entitled to working credits, they can breach the benefits cap and are also entitled to higher housing benefit to reward them for working. In Ireland, the changes cut the income of a parent working 19 hours on minimum wage by 18%.

Lone parents in receipt of rent supplement can only keep first €75 of wages and 25% of anything above this, regardless of the cost of childcare or transport Many lone parents are actually financially worse off now by working.

The policy is trapping lone parents into long-term social welfare dependency. This is something SPARK always predicted and which has now been validated by the recent report from NUIG.

We’re also out of step internationally by ignoring a parents care role once a child turns 14. In the UK, a lone parent is recognised until the child turns 16 or 19, if they are in full time education.

The new Single Affordable Childcare Scheme means the ending of capped schemes for lone parents in training and while lone parents may be entitled to the full subsidy of €8,000 pa , there is no cap on how much crèches can cost and we fear lone parents will not be able to top up the difference, especially if creches increase their costs as expected.

One of the greatest anomalies of the changes however is in relation to maintenance.

Under One Parent Family payment, the ‘other parent’ has a legal obligation to the Department of Social Protection to pay maintenance.

This now stops when a child turns 7 and the Department writes out telling the “liable relative’ they have no further obligation to the Department.

This resulted in 28% drop on the number of parents in receipt of maintenance. Worse than that, lone parents are now being told that unless they seek maintenance (from the person who received a letter saying they were no longer obliged to pay!) they will face financial sanctions.

This is worrying, as although the Department have stated they do not expect domestic abuse survivors to contact their abusers, they have confirmed they have no guidelines to know who is at potential risk.

So, after our presentation we will be handing in a petition to either reinstate the obligation on the ‘liable relative’ or remove the condition to receive maintenance. Women’s Aid and the NWCI are joining us along with some members of the Oireachtas Committee on Social Protection. 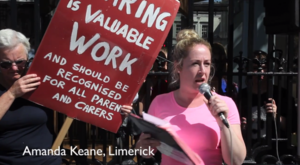 SPARK (Single Parents Acting for the Rights of Kids) held a protest outside Leinster House on Wednesday.

“This is in response to the most gendered cuts ever in the history of the state (98% of those on One Parent Famil Payment are women). 40, 000 lone parents are due to lose their entitlement to One Parent Family Payment this year once their youngest child is over 7. There have already been 11,000 families who have already lost this payment.” 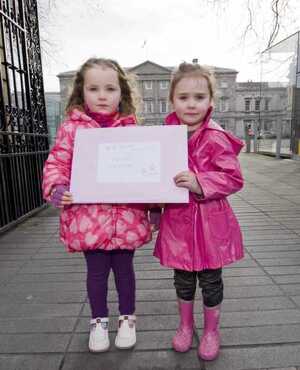 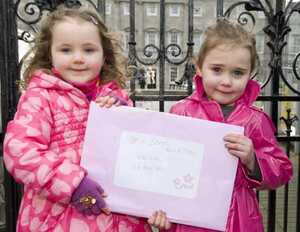 Teaghan De Rosa from Stepaside, Dublin, (left) and Sofia Grogan from Blanchardstown, Dublin, hand in a ‘Valentine’s card’ on behalf of SPARK (Single Parents Acting for the Rights of our Kids) to Minister for Social Protection Joan Burton in protest over Budget cuts in payments to single parents. 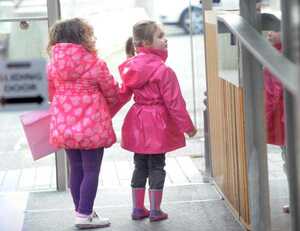