No surprise to hear that the unworkable sound quality destroyed the Stevie Wonder concert in the #3Arena last night – sound has always been dreadful there. The worst I have ever witnessed was the Steely Dan / Doobie Brothers show a couple of years ago. Top prices, bottom quality.

Just been back from an indescribable weird and frustrating Stevie Wonder gig. With awful sound as well. He only did less than a dozen of his own songs I’d say

I thought it was pretty poor. Sound was brutal (I was standing in front of the sound desk). Wedding DJ played half the set… And also during the 12 songs he actually played. Drums, bass and rhythm guitar completely overwhelmed his singing and playing. V disappointing tbh

@TicketmasterIre €130 for Stevie wonder and I’ve heard better sound from buskers on Grafton street. I waited a long time to see Stevie and that was not a €130 gig. 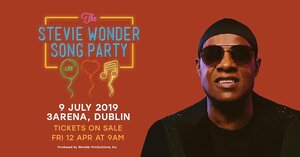 Ireland, I am very excited to personally invite you to my party, The Stevie Wonder Song Party: Celebrating Life, Love and Music, on Tuesday 9th of July at @3ArenaDublin. Tickets on sale 9am Friday! https://t.co/QNdoiFVOXw pic.twitter.com/Fvk1c0QAlH

You may care to crank that mother up.