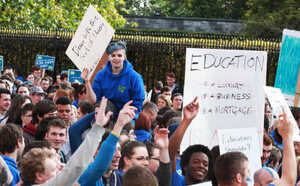 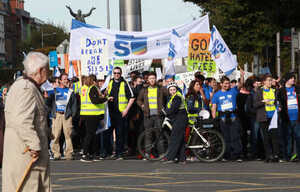 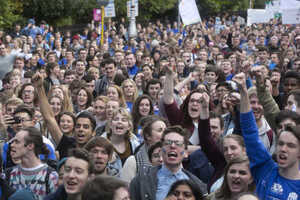 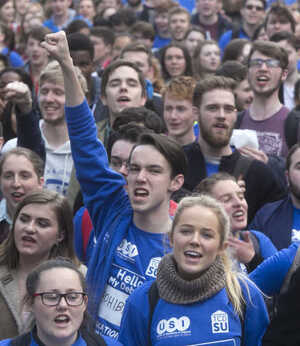 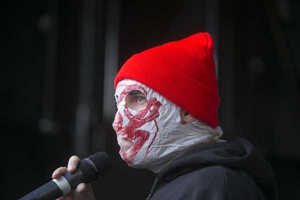 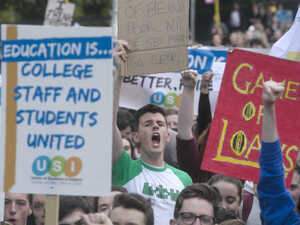 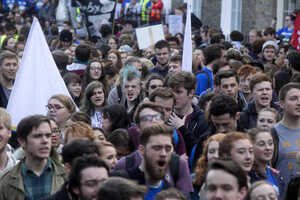 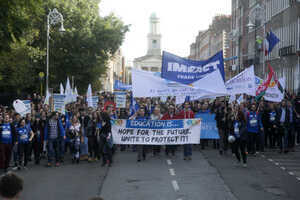 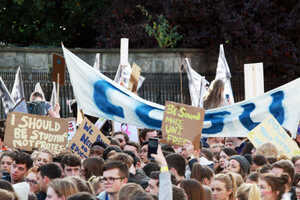 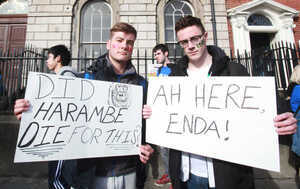 The Union of Students (USI) in Ireland estimate 5,000 students joined their national demonstration today to warn the government of the impact of income-contingent loans on students and young people.

The march headed towards the Department of the Taoiseach for a performance by the Rubberbandits and a call on the Government and the Joint Oireachtas Committee on Education and Skills to choose the publicly-funded third level education model as outlined in the Cassells Report. 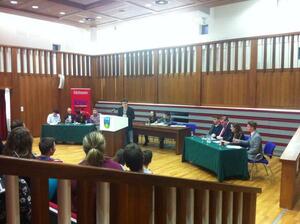 From a debate at UCD’s Law Society last night, the motion to fight for free education fees was defeated.

People Before Profit councillor for Dun Laoghaire Karl Gill was not impressed. 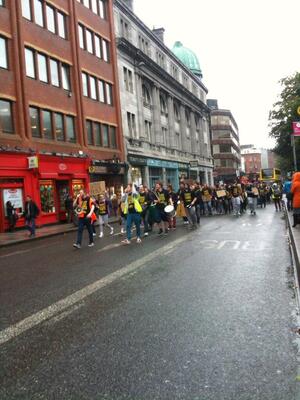 A student fees protest on Nassau Street, Dublin moments ago. 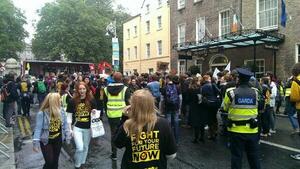 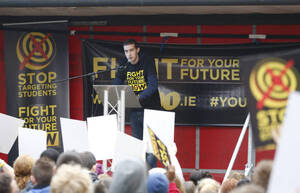 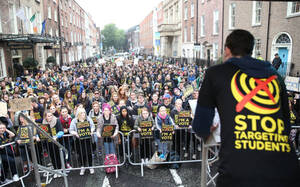 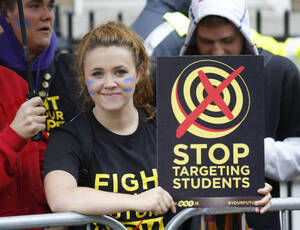 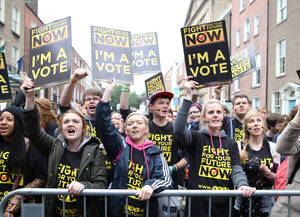 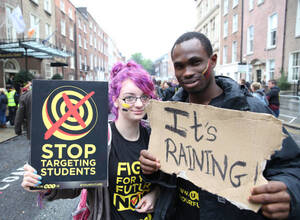 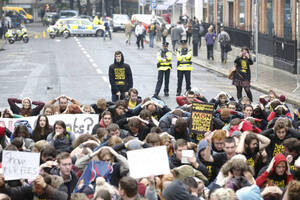 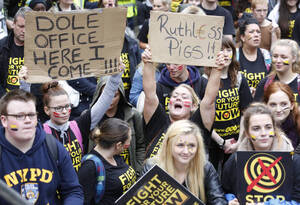 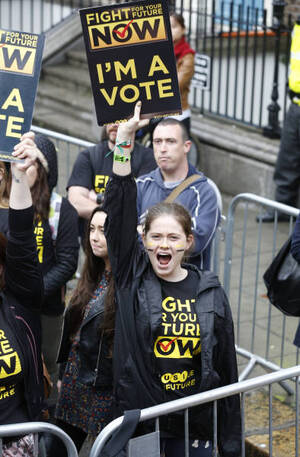 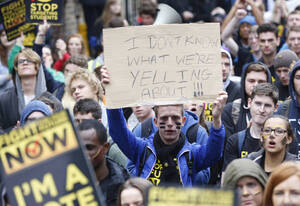 Scenes and cheeky signage  from the rally on Molesworth Street featuring USI (Union of Students in Ireland) President Joe O’Connor. (pics 1 and 2). 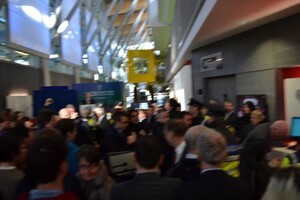 ‘Suzanne’, who was among those attempting to pelt Enda Kenny with eggs at UCD yesterday, defends her protest.

To my Students’ Union,

I am writing you this letter  to explain my motives for ‘attacking’ Enda Kenny yesterday. I hope you will excuse my terrible writing, but I feel that I have the right to explain, if not defend my actions.

I realise that more than likely I am in the minority of students. I have by all standards not had the best time in life. During my studies at UCD I have had some very good times and some very bad times, so I guess I will start at the beginning.

I entered first year of UCD in 2009 to study Mathematical Science. I had already dropped out of Queen’s in Belfast, as I could not cope with college after having been raped the summer previous. Being raped is something which has essentially all but destroyed my life. I started self-harming, the scars on my arms are still very visible;  I think that I attended maybe 6 weeks of my entire first year. The rest was spent in psych wards or being ferried from counsellor to psychologist to psychiatrist.

I still passed though, and most of that was down to Scott Ahearn, Welfare Officer at the time. He took me to doctor’s appointments, found me somewhere to live. He was the first person I phoned when I got arrested (Section 12 of the Mental Health Act if you’re wondering). I owe so much to him. I also come from an estate where very few people go on to third level education; instead they turn to drugs and paramilitaries. It is a constant source of amazement to my family that I went. I often get told by them that ‘people like us don’t go to college.’ My only hope is to prove them wrong.

When I began second year things weren’t much better, by this stage I had moved house 5 times, each move being a runner from one house to another in the middle of the night. I had no money, no food and it was looking very likely I would have no home either. I ended up in the psych ward again, I couldn’t cope. I decided that the best plan of action was to defer a year, to get a job, so as to have some money. It was easier said than done, but I did eventually start working with disabled students in DCU. It paid less than the dole, but it was more money than I had ever had. In this time I did become homeless, I lived with people who ended up putting a knife to my other housemate’s throat.

Third year has been slightly better, yes I am repeating a lot of exams, I still struggle to cope, but I have been getting by.

So I guess I should tell you why all this is relevant. END_OF_DOCUMENT_TOKEN_TO_BE_REPLACED 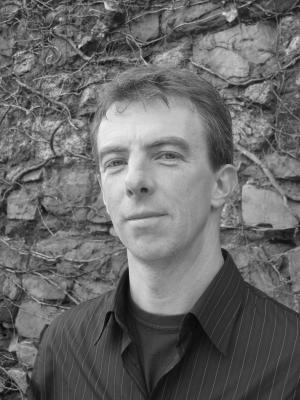 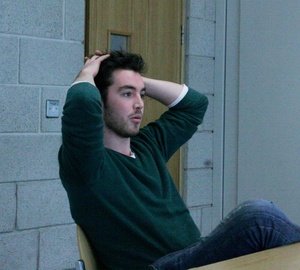 Writer and broadcaster Eamon Delaney (top) and President of the Union of Students in Ireland John Logue (above) spoke with Pat Kenny on RTE R1 this morning about student fees.

And how they fit in with academics’ salaries.

Eamon Delaney: “Apart from being a grumpy old man, I’ve tremendous sympathy for where students are and I’ll come to the further aspect of what the USI are doing in terms of reopening the Croke Park deal in a minute, which I think is very laudable. But, no, no, I’ve tremendous sympathy. It’s just all of this is costing us money. It’s true that it’s an investment but you know, when you’re broke, as an individual, you’re not going to invest in a share, you’re not going to invest in a bank account, we just simply do not have the money to put into the education sector what we used to. And there has to be…you know, if you think that, mainly speaking, third-level students come from, let’s say a middle class, in its broadest sense then there is money there to send kids to college, they have to be prepared to pay for it rather than the State having to underwrite that all the time.”

John Logue: “Well, I mean, look I can really appreciate the argument that we’re dealing with a financial situation and we have to be frugal with our public monies. However in my estimation, there are a number of ways that we can still maintain a fairly accessible system of higher education without having to task families with coming up with huge amounts of money just by changing the way we actually allocate the funding resources in higher education. We have..and I will discuss the Croke Park Agreement, I’m not afraid to do so. If we took 2% out of the higher education pay budget we would not have the increase in the student contribution that the Labour/Fine Gael government want to implement in this budget. That would save €70million. The increase in the student contribution would save €18.5 (million) so it virtually negates itself. I seriously think we need to look at those who are earning higher pay in higher education sector. It’s a known fact that academics in this country earn 30% more than their counterparts in the UK. They aren’t any more productive, they aren’t putting in more hours and I think it’s something that seriously needs to be addressed and this Government continues to hide under the veils of the Croke Park Agreement.”

Delaney: “Absolutely true. And I mean very, very bravely of the USI, effectively, the USI has led the way twice on this in seeking to have Croke Park reopened on that. I mean it’s absolutely disgraceful, the level of salaries for vice-presidents and presidents of the universities. The minister has asked them to take a pay cut , they’ve blithely refused or have gone on a go-slow on it. Look at what’s happening at our universities. There is less teaching time, it’s actually less productive than in the UK or Europe. There are these higher salaries. When there was talk of them being touched there was, the bedrock of academic freedom was invoked. Oh that was to do with permanence, I think, of the teaching staff or the lecturers and who’s suffering for this? The students, you know? So, on this, I am very sympathetic. But again, it’s like so much in this country. It’s like the rest of the public service, or the civil service, the upper ends get completely over funded, over renumerated and, at the coalface, the services are being shredded and made inefficient.”

Kenny: “The elephant in the room I suppose is some form of loan scheme for students…”

Pics via Magill and University Observer 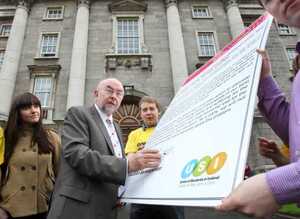 Ruairi Quinn pledging not to introduce student fees at the Front  Gate of Trinity College, Dublin, during the General Election campaign last year.