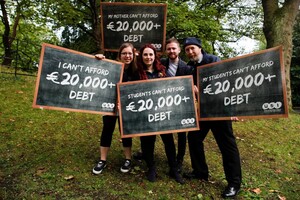 A photocall for the  announcement of a demonstration by the Union of Students in Ireland (USI) to call on the Irish government to “make a historic long-term decision and invest in the publicly-funded third level education model as outlined in the Cassells report”.

An income-contingent loan scheme is not a viable solution to third level funding as a burden of €20,000+ debt upon graduation will deter people from applying to college.

The financial strain of college spans across all communities and groups including parents, children, staff and teachers – not just students.

The demonstration is supported by members of the Coalition for Publicly Funded Higher Education including SIPTU, IMPACT, TUI, IFUT and National Youth Council of Ireland who will be joining the march starting at the Garden of Remembrance at 1pm on October 19.

Union of Students in ireland

My dear friend Niamh, a wonderful, smart, caring, and frankly just incredible woman has put up a story {above] on her Facebook of her trouble trying to acquire a grant through SUSI (Student Universal Support Ireland) despite what I’m sure you’ll agree are some quite deserving circumstances. I’ve asked her if it’s OK if I share the post with you and she has agreed. I think some of your readers may be interested to see what some people have to go through to try (and fail) to get even a partial contribution to the fees….