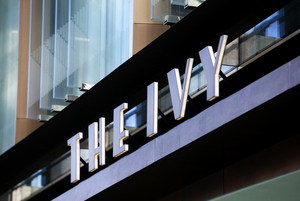 A group of protestors have gathered outside The Ivy Restaurant in Dublin to protest about how tips are given to their waiters. They are chanting “Cook your steak, sell your chips, give your staff their well earned tips”. pic.twitter.com/RVUg83uILZ 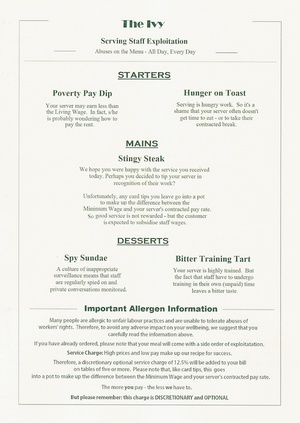 At The Ivy restaurant on Dawson Street, Dublin 2.

A group of workers, trade unionist and activists gathered at The Ivy restaurant to highlight what they claim is ‘tip theft’ of workers’ tips.

They also read out a ‘menu’ of workplace issues (top), they claim have been reported by past and present staff, to customers and management.

In a statement to the Irish Times today (see link below), the restaurant said:  “100 per cent of credit card tips are shared amongst the entire 150 staff members members (excluding management)”.

It added: “A gratuity per hour is paid to every staff member in addition to their contractual hourly wage and is guaranteed by the company in that any shortfall, regardless of whether any tips are paid by patrons, will be made up by the company.”

“All cash tips are kept by the individual waiter/waitress, although they are encouraged to share these tips with their colleagues.”