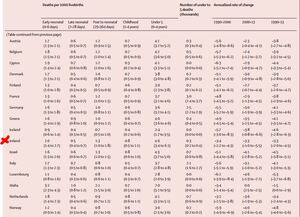 [Screengrab from a study entitled ‘Global, regional, and national levels of neonatal, infant, and under-5 mortality during 1990–2013: a systematic analysis for the Global Burden of Disease Study 2013’ published in The Lancet today. Click to enlarge]

Pretty interesting figures in the context of the resounding rejection by GPs of the Government’s plan for free GP care to under sixes, no?

I also can’t wait to hear Iona, Youth Defence, the Life Institute, etc. coming out in force to lobby for something to be done. After all, they care about children. ..don’t they?