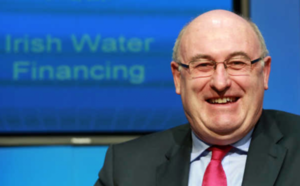 [Hogan] is likely to be the next Minister for the Environment, Heritage and Local Government. It’s a powerful gig, all the more so in the context of Hogan’s announcement earlier this month that he intends to shut down the Moriarty Tribunal when Fine Gael gets into government.

Phil Hogan And His One Point Plan (Broadsheet)

The Minister for the Environment has announced a dramatic reduction in the septic tank registration fee from €50 to €5 amid claims from opponents it was a clampdown and U-turn.

“He replied in a loud voice: ‘I have no problem screwing you. Hasn’t Mairtin been screwing you for years?’ Then he turned his back on me and said: ‘Business tomorrow,’ ” Ms [Ann] O’Connell, 70, said of the incident.

“What happened was that inspectors were actually appointed and ready to start the inquiries by the time the new Government took over and within weeks if not, well, certainly within months of Phil Hogan taking over as Minister for the Environment, those inquiries were terminated and the inspectors were stood down. And even in advance of the general election, Phil Hogan had actually said that the allegations were spurious mostly. But how did he know that they were spurious when they weren’t even being investigated? And the termination of those investigations, it seems to me, runs exactly counter to one of the principle recommendations of the Mahon Tribunal.”

The minister met with Mr Lowry six days after the Moriarty report’s release in Mar 2011 and after calls by the Taoiseach for the TD to step down.

“He did briefly bump into Denis O’Brien. They bumped into each other and exchanged pleasantries. They spoke for a matter of moments,” a spokesperson said.

April 2012 The ‘Would U Ever Relax And Feed The Children’ text.

The Kilkenny woman told how kids are going hungry as cash-strapped families scrimp to pay the hated 100 tax. But she was stunned when a reply from Hogan’s personal mobile said: “Would u ever relax. And feed the children.”

Enda To Probe Rude Text By Hogan (The Irish Sun)

Mr Hogan, who has an apartment in Villamoura on the Algarve, has an outstanding service charge of €4,320, according to a ‘debtors’ list document

Hogan’s unorthodox loans were personally approved by Fingleton to allow him buy a pied-a-terre house in Dublin 4 and a luxurious penthouse in Portugal using two interest-only loans of at least a decade each, an aggressive equity release, and what appears to have been, for his final loan, minimal paperwork.

Phil Hogan assured some of his constituents that a Traveller family would not be moved into their area. A letter sent from his constituency office to residents at a townland in Co. Kilkenny in May read: ‘Just a note to let you know that the Carthy family will not be allocated that house in your area.’ The message, written in the Environment Minister’s name and bearing his colour photograph, was signed on his behalf by a secretary. It read: ‘Kindest regards, Phil Hogan, Minister for the Environment, Community and Local Government.’

Ms Ní Bhraonáin, who is taking a constructive dismissal case against the Irish Independent, had the story about Phil Hogan and the Carthy family but alleges the Irish Independent didn’t publish it for ten days and only did so when it learned the Irish Daily Mail was going to publish it. The Phoenix magazine reported Ms Ní Bhraonáin was asked to investigate a dossier of alleged minor crimes pertaining to Mr Carthy, after the Irish Independent received the dossier “from somewhere in the Kilkenny area”. Mark Tighe, in the Sunday Times reported how Ms Ni Bhraonain alleges there was political interference with her story. Mr Tighe reported:

Ní Bhraonáin will claim that when she asked Independent desk staff about the paper’s attitude, it was implied that the newspaper was ‘friendly’ towards Hogan.

Are Government Ministers Really Exempt From The Household Charge?