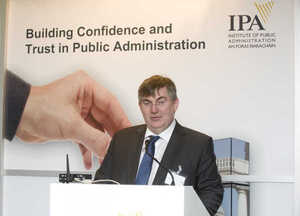 Kevin Cardiff, the Government’s nomination to the European Court of Auditors, is up before the Committee on Budgetary Control of the European Parliament later this afternoon. He will know today if he has got the job.

What is it about this guy? His critics are told to shut up. His costly mistakes are forgotten. His inept handling of blunders are swept aside. His department’s attempts at cover-ups and his self-satisfied demeanour seem to make no difference whatsoever.

The Taoiseach spoke by phone to the leader of the centre right grouping in the parliament, the European People’s Party, while Mr Gilmore is understood to have spoken to the head of the Party of European Socialists.

It is also understood that Minister for European Affairs Lucinda Creighton held talks in Strasbourg last week with Ingeborg Grassle, the German head of the EPP delegation on the committee.

You would almost think he posseses some information that could embarrass a lot of people.