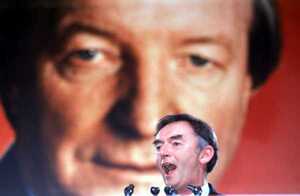 Padraig Flynn’s record of achievements for Mayo will never be equalled by any politician argues Castlebar Fianna Fáil councillor, Blackie Gavin.
In what will be interpreted as a shot across the bows of An Taoiseach Enda Kenny, Cllr Gavin made the statement at a recent meeting of the Castlebar Fianna Fáil Cumann in the Welcome Inn Hotel. There it was unanimously agreed that a vote of thanks and appreciated be extended to former EU commissioner  Mr Flynn for his work on behalf of Castlebar and Mayo during his years as a TD and minister.
…When asked by The Mayo News last night about the Mahon Tribunal findings that Mr Flynn had corruptly sought and received a payment of £50,000 from developer Tom Gilmartin in 1989, Cllr Gavin remained tight-lipped and said it was a ‘private matter’.