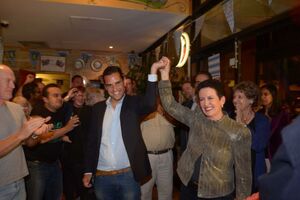 You may recall our post yesterday about Alex Greenwich (above with Sydney Mayor Clover Moore) and his campaign in the by-election for the state seat of New South Wales’ capital city.

Well, the photo above was taken about an hour ago and somewhere in the crowd is Irish emigrant Darren Conlon who writes:

I’m really happy to tell you that our candidate Alex Greenwich won the by-election and is now the Member for Sydney, in the State Parliament of New South Wales. He is the first member of any Australian Parliament in a same-sex marriage.
I also want to let you know that I was approached outside the polling booth by a emigrant Irish voter who recognised me from Broadsheet and who told me she had decided to vote for Alex after reading the article and better, she had also recommended him to several friends!
All in all it has been a great result for equality, but the fight goes on… 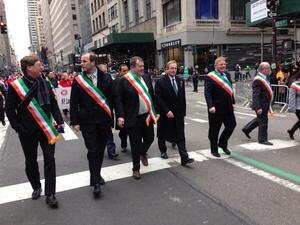