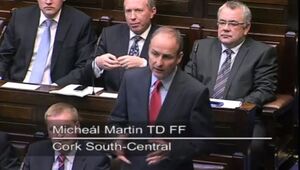 Hey – You Killed Keny! Wait. What?

Remember When The Bishops Met The Pope?