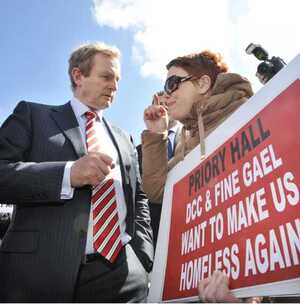 (Stephanie Meehan, right, whose letter to Enda Kenny said the 18-month wait  in finding a solution to the Priory Hall crisis contributed to her partner Fiachra’s suicide in July of this year)

Enda Kenny gave a brief response to questioning about Priory Hall to Paschal Sheehy on RTE R1’s News at One.

Enda Kenny: “Priory Hall in my view, is an example of the worst of what happened during the so-called ‘Celtic Years’ (sic) , where people, through no fault of their own were put into houses that were effectively deemed to be death-traps. This is not going to sort itself out. Now, I want to say – I spoke to Minister Hogan about this, there is the issue of the rent matter that is before the courts.
“But I want the people to know, that just as in the same way as commentators said; ‘You won’t do anything about The Magdalenes, or you won’t do anything about The Pyrite problem, they said; you won’t do anything about Priory Hall. But, I want to assure you that we will!‘ I just need a little more time. I think it would be an injustice, a complete injustice to have these people, expected to pay mortgages and interest on houses that they will never live in.”

Kenny: “I have asked for a report for myself on this matter, I just need a little more time to get clarity about what is the best thing to do.”