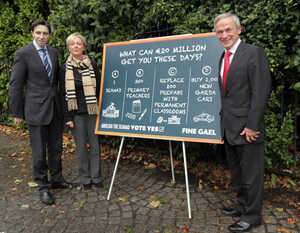 Privately, they consume them as voraciously as a stray dog coming upon a scrap of food. The bigger parties, especially Fine Gael over the past decade, have been huge consumers of private polling. You can be as sure as night follows day the two lowest common denominator slogans that dominated Fine Gael’s posters – save €20 million and fewer politicians – came straight out of focus-group polling.

That was borne out by The Irish Times poll this week which showed that despite all the criticism of it being a “cheap shot”, the €20 million slogan was the pay-off line for the Yes campaign, with 43 per cent of Yes voters citing it.

Politicians publicly dismiss polling but are in fact in thrall to it (Harry McGee, Irish Times) 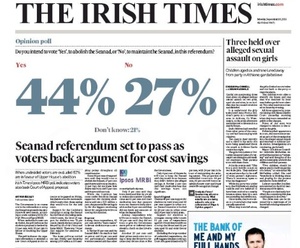 With a week to go, the Yes side was comfortably ahead. The Irish Times/Ipsos MRBI poll conducted the previous weekend indicated a 24-point margin in favour of abolishing the Seanad. Then it vanished.

Why the voters proved the polls wrong on the day (Damian Loscher, irish Times)