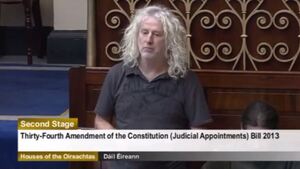 During the second stage debate of the Thirty-fourth Amendment to the Constitution (Judicial Appointments) Bill 2013 in the Dáil last Friday, Independent TD Mick Wallace spoke about unsolved murder of Fr Niall Molloy in 1986.

It follows last December’s appointment by Justice Minister Alan Shatter of Mr Dominic McGinn, Senior Counsel, to carry out an independent examination of the Report of the Garda Serious Crime Review Team relating to the death of Fr Molloy.

From around 1.50 on the video, above, Mr Wallace said:

A final example of what can go wrong when judicial appointments are political and when judges are too close to political parties is the case of Fr. Niall Molloy’s murder. Mr. Justice Frank Roe was appointed President of the Circuit Court just before Richard Flynn was tried for the manslaughter of Fr. Niall Molloy in 1986.

Judge Roe was a personal friend of Richard Flynn, the defendant. Despite this fact, he first decided to assign the case to himself, in an extreme abuse of the power that came with his role as President. He then withdrew the case from the jury after three and a half hours, without letting it consider any of the evidence and directed it to acquit. One eye witness reported that the then deputy leader of Fianna Fáil, Brian Lenihan Snr., was in the room which was the scene of the murder.

Although I welcome the eventual appointment of Dominic McGinn, senior counsel, to review the Garda investigation into the Fr. Niall Molloy murder and hope the facts and background to the case, to include its strongly political background, can finally be ascertained and that the family of Fr. Niall Molloy may gain some justice and peace, it is yet again a shame that this decision to review has only come after a delay of almost 30 years.

If the Minister, Deputy Alan Shatter, would only decide matters based on his ministerial responsibilities to justice rather than on political motivations and his own political survival, we might see more decisions based on transparency and accountability and fewer underhand tactics employed such as delay and confusion, dismissal of allegations, discrediting of real victims such as whistleblowers and the Garda Síochána Ombudsman Commission, GSOC, and misrepresentation of law and fact. These tactics never work on a permanent basis, as the Minister is now discovering to his peril. The truth generally comes out.

Previously: “We Do Have Truth, But We Don’t Have Accountability”