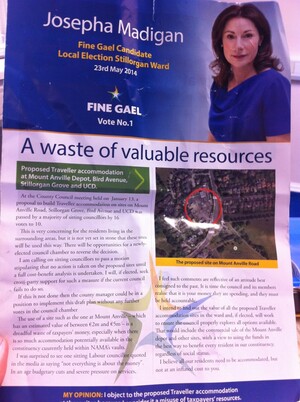 Dear Ms Madigan…I am a resident of Goatstown. Your lack of detail and ill informed literature leads me to believe that you have given this matter no further consideration than a cheap populist attempt to drum up some anti-traveller sentiment in advance of your election campaign.

I couldn’t let this opportunity pass without taking the time to say a definition of racism is someone who believes that members of different races and ethnic minorities should be treated differently. Your literature indicates to me that you think that members of the traveling community should be treated differently. That they should not be housed in your ward and the Council should simply find somewhere else for them to live.

Contrary to what you seem to believe, some voters in this constituency do seek political representation that is fair, non discriminatory and represents tolerance and acceptance of all races and ethnic minorities.

Travellers have been marginalized, rejected and told to move on in South County Dublin for decades. Clearly there continues to be a prevailing climate marginalizing Travellers in South County Dublin. Distributing Anti-Traveller literature such as this is offensive and I hope will be received with similar disdain by your constituents. I will most certainly be raising it at the local residents association and indeed the many other community groups and voluntary associations of which I am a member.

You criticised an unnamed Labour Party Councillor in your literature for being in favor of the proposed sites on the basis that “everyone deserves somewhere to live”, you said that you feel “such comments should be consigned to the past”, alas I fear that racist views and anti-Traveller literature such as the material you distributed and the political campaign under which you are running are sentiments that should be consigned to the past….

To The People of Clondalkin