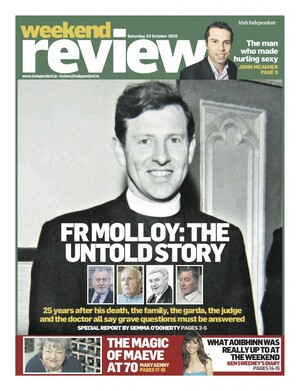 The Case of Cynthia Owen, the murder of Fr Niall Molloy and the treatment of of journalist Gemma O’Doherty made it to the floor of the Dail during the Alan Shatter Confidence debate yesterday. to wit

Joe Higgins: “I want the Minister or senior gardaí to answer why during a two year audit of An Garda Síochána by the Data Protection Commissioner, which produced a 95-page report only a few weeks ago about data protection issues, there is not a single mention of a phone call, a taped phone call or anything relating to that. I want the Garda to explain who held off the truth from whom. I want the Data Protection Commissioner to make a statement on this incredible circumstance.”
It is time for a commission of inquiry into the circumstances surrounding the death, and the investigation of the death or murder, of the Reverend Niall Molloy as pursued relentlessly by the journalist Gemma O’Doherty. It is one of the longest running miscarriages of justice cases in the history of the State. The Government must move on this.”

Richard Boyd Barrett: “We cannot have confidence in the Minister for Justice and Equality. His appalling behaviour in dealing with the penalty points scandal, the whistleblowers, the bugging scandal in GSOC and now the taping controversy has been well rehearsed here, so I will not go through it. All of those things have brought the administration of justice and policing in the State into disrepute. That is why he has to go.  There are a couple of other people who deserve to be mentioned in the short time I have. Irish Independent journalist, Gemma O’Doherty, was sacked for door-stepping Commissioner Callinan over the issue of penalty points that he may have had quashed last year, by the editor-in-chief of Independent Newspapers who was a former editor of the Garda Review. It is alleged in newspaper reports that he had his penalty points quashed. This is the sort of State we live in.
“I would gain some return of confidence in the Minister for Justice and Equality if we put all of that aside and going forward he looked interested in bringing justice to people who have been denied it. Three times in the last two weeks I have asked about the appalling case of Cynthia Owen, a child who was ritually raped and made pregnant at the age of ten. Her baby was murdered and she alleges that gardaí were involved in that abuse. The case was closed down after six weeks and nobody was ever brought to trial over it.
“There was a sham investigation years later when the victim of this heinous crime was not even interviewed. The person who carried out that investigation had said publicly a few weeks before that cases of abuse like this should not be investigated at all. Ms Owen has asked the Minister, Deputy Shatter, through her solicitor, for a meeting. She is seeking a commission to investigate this heinous crime, yet the Minister still says “No”. How can one have confidence with issues like that?”