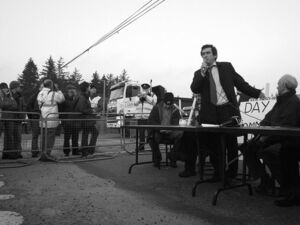 [Jerry Cowley apparently being filmed by a garda while he addressed a Shell to Sea protest at Bellinaboy, Co. Mayo in October, 2006]

In 2007, Former Independent TD Jerry  Cowley suspected his phone was tapped because he supported the Shell to Sea campaign and had raised his concerns with Justice Minister Michael McDowell.

He later claimed  his grievances were met with a ‘wall of silence’.

In light of recent bugging revelations, Mr Cowley has raised the matter again.

“The question is, was Belmullet Garda Station bugging phones because of the Corrib campaign? And can any of the tapes now being examined answer questions I raised in the Dáil in 2007?”

“I have no doubt that whatever facilities the Gardaí had at their disposal at the height of the Corrib controversy were used by them. Such an approach was endemic at the time. Our campaign was always very transparent and open, and we held meetings every Sunday night that anyone could attend. But we always feared we would be infiltrated, and when there was a series of unusual coincidences where certain people had knowledge of information they should not have been privy to, it caused me great concern.”

“I wasn’t the only person, associated with the Corrib campaign, who expressed concerns about their phones being tapped. They were met with a wall of silence, but perhaps the tapes that are now being transcribed will give us new answers.”

Concerns about Corrib bugging must be re-examined – Cowley (Aine Ryan, The Mayo News)