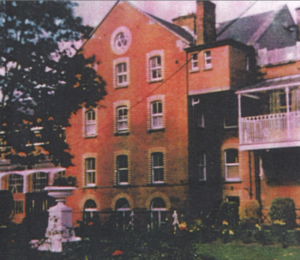 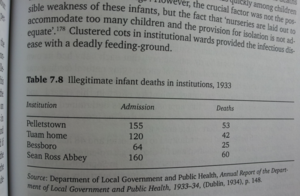 From top: St Patrick’s Home on the Navan Road in Dublin which was initially known as Pelletstown and a table in Dr Lindsey Earner-Byrne’s book Mother and Child outlining the number of infant deaths in four mother and baby homes in 1933.

On Sunday, May 25, Alison O’Reilly in the Irish Mail on Sunday reported that it’s believed 796 babies were buried in a disused septic tank by Bon Secours nuns between 1925 and 1961.

On Saturday, May 31, Neil Michael, in the Irish Daily Mail reported that there may be three other mass graves at three other locations, namely: Sean Ross Abbey in Roscrea, Co Tipperary, where 790 children are believed to be buried; Bessborough, Co Cork, where it’s believed an estimated 2,000 children may have been buried before it closed in 1996 and St Peter’s in Castlepollard in Co. Westmeath, where it’s believed 300 to 500 children died.

Mr Michael also reported that the most common cause of deaths was marasmus – a form of malnutrition.

On Sunday, June 1, Alison O’Reilly, in the Irish Mail on Sunday, reported that there may be a fifth mass grave, containing an unknown number of bodies, on the grounds of the Sisters of Mercy Convent in Loughrea, Co. Galway. She reported that the site was used to bury the children who died in St Brigid’s Industrial School which was there for almost 100 years before it closed in 1967.

But what of Dublin?

Dr Lindsey Earner-Byrne, in chapter 7 of her book Mother and Child: Maternity and Child Welfare in Dublin 1922-1960 wrote:

“Dublin was the destination for many unmarried mothers, and the Department of Local Government and Public Health described the tendency as ‘somewhat remarkable’. Of the 551 illegitimate births registered in the city in 1931, only 335 were found to be ‘chargeable to the city’. Each local authority was responsible for the welfare for the illegitimate children born of women from its area. However, the social shame led many countrywomen to flee to Dublin for anonymity.”

“In general, Catholic unmarried mothers from Dublin who remained within the Irish system were either sent to St Patrick’s Home, Pelletstown, to one of the various magdalen asylums in the city or to the Legion of Mary hostel [Regina Coeli] established in 1930. Protestant mothers were received at the Bethany home in Orwell Road, Rathgar; these women were also accepted in Pelletstown, but the preferred option was to send mothers to homes that catered specifically for their religious needs.”

“In 1939 the annual inspector’s report noted that the death rates in the various unmarried mother’s homes around the country are undesirably high: Bessboro home, Cork had an infantile death rate of 47 per cent, Shan Ross Abbey, Roscrea had a death rate of 18 per cent, the Manor House, Castlepollard a rate of 7 per cent, and St Patrick’s Home, Pelletstown and the home in Tuam, County Galway had rates of 23 per cent and 15 per cent respectively. By 1943 [Inspector Alice] Lister noted that the rate in Bessboro was a staggering 61 per cent, and Shan Ross Abbey and the Tuam home had rates of 35 per cent, whereas Castlepollard and Pelletstown had shown ‘a satisfactory decrease’.”

“In 1945, 156 babies had been admitted to the [Regina Coeli] hostel and 48 had died. In 1946, 85 infants were admitted and 33 died of gastro-enteritis, seven of those having been admitted before January 1946. In September 1946 Dr Murphy recommended that, in order to reduce infant mortality in the institution, visiting medical officers should be appointed, a day and night nurse provided, and an isolation ward established with a separate kitchen and sterilisation unit for infant feeding. Despite regular meetings between [chief medical adviser to the Department of Local Government and Public Health, James] Deeny and the staff of the hostel, it took another year before Frank Duff, the chairman of the Legion of Mary, agreed to the employment of a doctor. In May 1948, in response to the level of infant mortality, Deeny removed the hostel’s exemption from inspection.”

Must Be Mounted On A Crucifix

No Drums, No Swords, No Flames