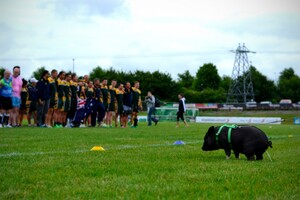 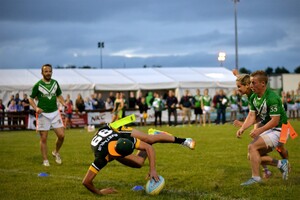 “Last night the Australian Tag Rugby Squad arrived in Limerick where, after a brief “international incident” during the Australian national anthem (see top), they played out a thrilling series of games against the Limerick regional tag sides. Australia proved far too strong for the Limerick Women’s and Mixed Senior teams but the Limerick Men’s and Mixed Open teams led Australia at half time in their games. The Mixed Open game was a thriller, with Limerick leading with 10 minutes to go, before Australia pounced for two late bonus tries (2 points) to run out 15-10 winners.
Today the attention turns to the International Tri Nations tournament between Ireland, Australia and Great Britain. Each nation will play each other in Men’s, Women’s, Mixed Senior and Mixed Open games. The matches kick off at 3pm in Old Crescent RFC, Limerick and run until 9pm.”