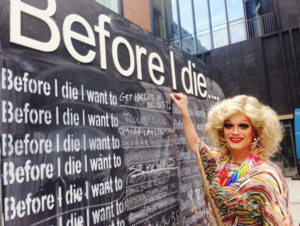 Panti Bliss gave Amnesty’s annual pride lecture in Belfast at the weekend. She also wrote that, before she dies, she’d like to get married in Belfast during the festival

But how long will she have to wait [to get married in Belfast]? Northern Ireland looks set to become an equality backwater for the LGBTI community as equal marriage for same-sex couples is introduced in the rest of the UK and Ireland (if passed in the constitutional referendum next Spring), but not in NI, as the Stormont’s biggest party, the DUP, continues to block moves to introduce legislation.

Previously: Miss Panti And The Kindness Of Strangers