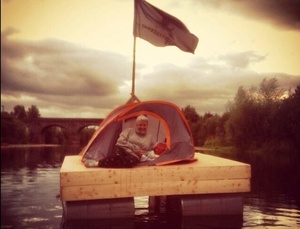 A novice activist, Anne Cody took to ‘saving Kilkenny’ like a duck to water.

Take a leisurely stroll through the streets of Kilkenny. Where else would you see so many buildings of historical and archaeological beauty in so short a distance?

Kilkenny Castle and parklands, St Mary’s Church and graveyard, The Kilkenny Design Centre and craft workshops, The Hole in the Wall, Rothe House and walled gardens, St Canice’s Cathedral and Round Tower, The Black Abbey, The Butterslip, Market slip, The Old Jail and Courthouse, The Shee Alms House etc.

I don’t know the dates for these streets and buildings but I do know that Kilkenny is the most beautiful, walkable city in Ireland and while I was not born here and I do not live within its walls it is my city and I am very proud of it.

At first I didn’t believe it when I heard that ‘they’ were planning to build an extremely wide concrete bridge over the River Nore in the shadow of St Canice’s Cathedral, near to Green’s Bridge.

I would state exactly how wide this bridge will be but specific information relating to the bridge seems to be very difficult to get from the County Council I understand however that the proposed structure will be wider than the one built to take the traffic on the ring road.

I became quite angry when I realised that the building of this bridge was imminent.
I began to wonder if the end of the city near Green’s Bridge was not valued as much as the area around the Castle.

I could see that the council’s acquisition of the extensive river side Diagio site including the historic St Francis’s Abbey , provided a wonderful opportunity for creating an imaginative urban space that would attract tourists, enhance the life of Kilkenny people, support local businesses and protect the ambiance of the medieval city.

It might include a riverside park, a jetty for small boats, or maybe an intergenerational college of law, empowerment and civic responsibility where innovative and creative thinking and action are positively encouraged. At this point my imagination runs dry but that doesn’t matter because within the residential and business community of Kilkenny City and County I am sure there are many excellent, innovative ideas. I get quite excited and passionate when I think of the possibilities.

A dirty, great, big, concrete bridge would, be a serious impediment to the creation of such a space. It makes much more sense to have a comprehensive development plan for the area and if a bridge is needed then build one that is sensitive to the medieval heritage of the city.
Of course, if the proposed bridge in all its splendid ugliness were to improve the flow of traffic in the city then this would be a significant point in its favour.

Now at this point I am really struggling for words. Despite asking questions and listening to many different people I do not know where this bridge will join the streets of Kilkenny. Will it be Vicar Street, Dean Street, near the car park at Dunnes Stores or will it just stop dead on the side of the river? Will it encourage extra traffic onto the city centre streets or will it sit quietly empty until such time as the Diagio site is developed?

Anger gave way to hope when I realised just how many people of all ages and backgrounds felt the same way as I did and were prepared to do something about it . In fact when I learned that many people had been working tirelessly for years trying to get their voices heard, to prevent this folly I was ashamed that I hadn’t spoken out sooner and worked with them but now I was determined to get involved and be one more voice calling for a review of the project and increased public consultation.

Going to the protest for the first time was not particularly easy. Would I be welcome? Would I be expected to stand in front of a moving truck? Was I going to be arrested? Would I get a criminal record? What strain would this put on my relationship with my husband who did not understand what I was doing and seemed to be even more anxious than I was?

I decided just to go and see what happened, one step at a time. I arrived, said ‘Hello’ picked up a placard and started to walk. I soon realised that I had not joined an army, this was a protest of individuals. I could come and go as I pleased, I could confront the trucks or police or I could walk away. While everyone welcomed me no one had expectations of me. I felt good , on my own terms I was able to stand up and be counted for something I believed in.

Along with the many people who man the protest points 24/7 I learned that there were many others working in different ways from making posters, contacting the media, checking out legal options etc.. Not forgetting the support of drivers who beep as they pass by. Though on this point we now need to ask drivers to stop beeping because the extra noise is very difficult for local residents to live with and the intention is to run a peaceful and respectful protest.

That was three weeks ago and since then life has been an emotional roller coaster. I have made new friends and got to know old ones better. At times I have been bitterly disappointed When I heard that the pile driver, escorted by police in the middle of the night, had got into the site I wondered if I would have been able to make a difference if I had been there. Would I have had the courage to keep walking? What would I have done? I was angry when I saw the photograph of a council executive who seemed to be sneering at the people who were protesting.

Every time I heard someone say ‘This bridge is going ahead. There is nothing you can do about it’ I became more determined not to give in. I wondered about my courage and commitment until that Thursday morning when I saw the pile driver move towards the river and I knew that the only way to stop it was to get into the water. A strong swimmer I had no fear of the water and I quickly joined the other swimmers.

Thankfully the day was hot so the water was a very pleasant place to be and it seemed to be clean enough to swim in. I wasn’t particularly concerned that I would come to any physical harm but I was quite worried when the guards arrived on the opposite bank and I was very worried that this would be reported in the media and my husband would see a picture of me in the river sitting a few inches from the pile as it was being driven into the river bed.

I was delighted when, for safety reasons after two hours in the water the pile was removed. It felt such an achievement that a few bodies in the water had caused the pile to be removed and the pile driver to be taken back to the yard. It was even better when there was an agreement that work would stop altogether until after the Saturday Council Meeting. Small victories can energise and encourage everyone to keep going.

Along with many others I was, mistakenly, hopeful that the Saturday County Council meeting would call a temporary halt to the work until a review of the project had taken place. When this did not happen I knew that work on the site would begin again on Monday morning it was another very disappointing day.

Then in the early hours of Monday morning The Noreship Enterprise’ arrived on the river. Small and compact but sturdy and safe it was an important addition to the cause. For me it also provided an oasis of calm in the middle of all the activity. Much as I love to work, be active, have a cause and a purpose I also need quiet time alone. I need calm and stillness. I need just to be. On Tuesday I was delighted to have the opportunity to spend the night alone, on the raft. The raft has its own anchor but it was also securely tied with ropes onto each bank. I felt safe.

After all the emotion, excitement, noise, chat , busyness I was alone floating in the middle of the river. All was still and quiet. Mentally blocking out the noise of passing traffic I listened to the fish jump and saw the birds flash by skimming the water as they went. The most noticeable being the bright blue Kingfisher.

As daylight faded the city lights turned on and were reflected in the shimmering river. I couldn’t believe my good fortune, surely this was the most desirable location in the city and it was all mine.

Looking ahead I could see Kilkenny Castle towering above the river and surrounding buildings and to the right I could see the magnificent St Canices Cathedral and Round Tower. Rafting between John’s bridge and Green’s bridge I reflected that if the new bridge had been sensitively designed to fit in with the existing cityscape as part of an overall traffic plan it would have been welcomed and I would not have had my night on the river. Every cloud does have a silver lining!
.
As I write this I swell with pride that Kilkenny is my city and I am doing all I can to preserve its beauty for myself and for others. Stopping the bridge is just the beginning, we then have to take, claim, demand, insist on the opportunity for our ideas, vision and wisdom as citizens to be at the heart of the future development of Kilkenny. This is our right and our responsibility.

I am no longer walking on eggshells at home. My picture has been seen, a conversation is taking place. I am on the receiving end of some good natured teasing. Today my husband is making a placard, tomorrow he is going to see what is happening at Greens Bridge. I wonder if I can persuade him to spend a night on ‘The Noreship Enterprise’ with me. Now that would be very nice!

Previously: Taking It To The River

Taking It To The River

37 thoughts on “The Lady In The Raft”