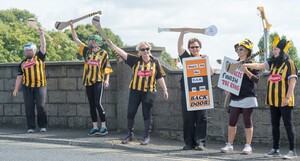 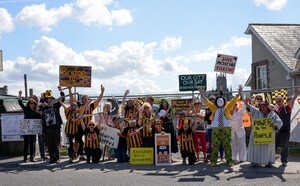 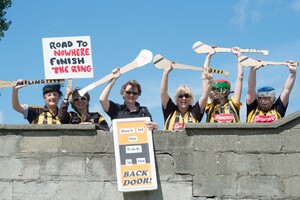 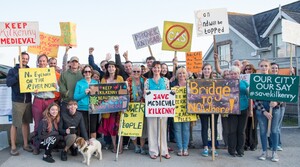 Protestors in Kilkenny, including Cllr Breda Gardner (top pic third from left) calling for the end of works on a bridge into the town.

“Protestors in Kilkenny will not take off their Kilkenny Hurling Jerseys until after work is halted. One of the protestors, Corkman Darragh Byrne- “I really hope this is over before the All Ireland. I will never get back into Cork.”

Kilkenny’s only independent councillor Breda Gardner says that the legal advice given at a special council meeting on the central Access Scheme (CAS) was based on information that was “factually incorrect”.

Cllr Gardner sought a second opinion over the legal advice that was given to council members, and has challenged the council to provide proof of its assertion that the elected members were informed in June that works were due to be undertaken on the CAS or that expenditure had been committed.

Section 138 of the Local Government Act mandates the council Chief Executive to inform the elected council before any works are undertaken or before any expenditure is committed in connection with proposed works.

“I never received this information, and a number of my fellow councillors have told me that they did not receive it either. Given that the council have been unable to furnish me with evidence that they fulfilled their obligations under section 138 – despite my repeated requests – I am led to conclude that they never sent me the information, and are thus are in breach of the act,” said Cllr Gardner.

Taking It To The River

17 thoughts on “These Colours Don’t Run”