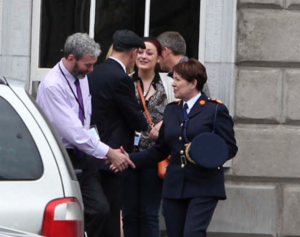 You may recall a post last week about how Gemma O’Doherty reported in The Sunday Times that former Garda John Wilson still hadn’t received his ‘certificate of service’ even though he left An Garda Síochána 15 months previous – after 30 years of service.

It was also reported that, before Mr Wilson left the gardaí in May 2013, he was disciplined for attending a court hearing on a day in which he wasn’t on duty. When he was questioned by garda management to explain his whereabouts, he said he had done nothing wrong. After refusing to account for his presence at the hearing, he was subjected to a disciplinary process. In April, he lost a High Court case he took against the disciplinary action and he’s now appealing this to the Supreme Court.

During his case in the High Court, Mr Wilson was offered an exemplary certificate of service on the condition he withdrew his action, but he didn’t.

The certificate [exemplary] was sent to him by registered post, three days after his story appeared in last week’s newspaper…Speaking yesterday Wilson said he was relieved the situation had been resolved. “It’s taken more than 16 months to get it, but at least I have it now and can try to get a new job,” he said. “It was a terrible worry hanging over me. I badly needed it.