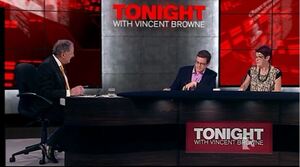 On last night’s Tonight with Vincent Browne, Vincent was joined by UCD lecturer Ailbhe Smyth and John McGuirk to review the newspapers.

The discussion turned to Paul Cullen’s story in the Irish Times of staff in University Hospital Galway being disciplined in relation to the care of Savita Halappanavar.

54 thoughts on “Disingenuous To A Fault”