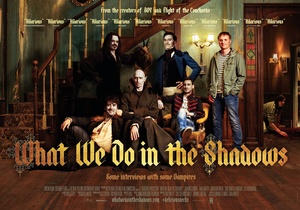 1. Three vampires living in a shared flat in downtown Wellington are struggling to adapt to the challenges of modern living. They allow a camera crew in to their lives to film a documentary.

2. Jemaine Clement and Taika Waititi have teamed up again to develop their short film of the same name into a full feature.

3. It’s the first time they’ve collaborated since Eagle vs Shark (2007.

6. Will Ferrell’s online vehicle Funny Or Die is lending its marketing weight to the film as part of the distribution.

7. Broadsheet Prognosis: We are Team Funny.

1 thought on “Broadsheet Trailer Park: What We Do In The Shadows”