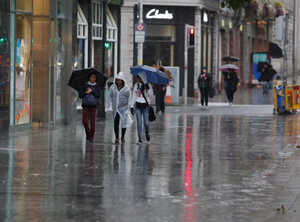 Whilst walking through Dublin yesterday afternoon, it began to rain. Within minutes, what was a light shower, quickly became torrential and I had forgotten my umbrella. In the midst of searching for shelter, I crossed paths with a man who appeared to be homeless and was asking passers-by for their loose change. Reaching into my coat pocket, I had less than one euro in coppers and apologised for the small amount but placed the coins into his polystyrene cup.

As I continued my fast-paced walk, I heard someone calling ‘Love, love, love’ from behind me. I turned around and the man who I had just given money to was trying to gain my attention and was asking me to come back to where he was sitting on the concrete. He asked me if I had an umbrella and having explained that I’d left mine in college, he offered me a navy teddy-bear umbrella; one of the very few possessions he had on his person. I refused and said that I couldn’t take it from him but it fell on deaf ears. He told me that the rain was too heavy and I would get sick if I was walking around in it for much longer. He placed the umbrella in my hand and merely asked me to return it the next time that we run into each other

I was completely flabbergasted. I asked him his name, introduced myself and shook his hand. The rain continued to worsen and as I raced back to college, I could not help but think of how cold and wet that man must now be. Two hours later, the weather cleared and Dublin experienced some brief sunshine. With the umbrella and a thank you card in-hand, I meandered back to the location where I first met him and luckily, he was still there. Shaking his hand, I thanked him for his generosity and incredible kindness. His response? You’re welcome.

For What It’s Worth (Millie Mélange)

That Girl In Blue

64 thoughts on “Under His Umbrella”