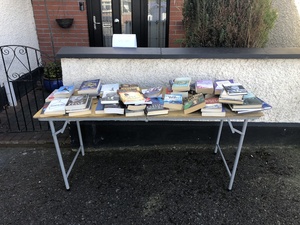 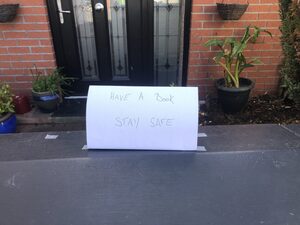 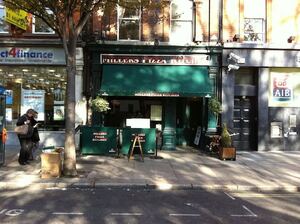 Miller’s pizza on Baggot St this eve, a man came in, said ‘I’m homeless, I’m cold and I’m hungry. Would you have any leftovers I could take with me?’ The waiter took a pen and said, ‘Take a seat. What can I get you?’ That’s how easy it is not to turn someone away.

Ah lads. This is unbelievably wonderful. Never underestimate the impact you may have on a persons life. pic.twitter.com/liCPi8fwZV I bought a coffee in the Lime Tree at Kilmainham Gaol Wednesday and strolled back to Inchicore [Dublin 8] guzzling away. As I reached the Black Lion [Emmet Road[  a woman ran up behind me clutching a twenty that she said I’d dropped.

I looked down and saw my purse was inverted and unzipped and there was no sign of the over €100 in cash that had been there 10 minutes previously.

Cursing my stupidity I walked back to see if I could find any more and ask in the café but all I recovered was two supermarket tokens.

Fast forward to that evening and I get a call from a lovely woman called Siobhan who’d found a wad of cash and my hospital appointment card and was wondering if I was still at the same address. All was deposited through my letterbox yesterday.

Thanks Siobhan and kudos to the people of Inchicore! They won’t save your bacon.

Just wanted to share this lovely random act of kindness on Friday. I stopped my car for three minutes on the Rathmines Road (Dublin 6) to run into the Post Office. As there was a bus stoppage and the bus stop was not in use, I thought that this wouldn’t cause a problem.

Anyway, the clampers got me and the lovely people in Pot Bellied Pig came over and gave me a brownie (above) to help me turn my day around. I was also given a lovely hug and offered some tea. What lovely lovely people!

Needless to say, the brownie was delicious. Whilst walking through Dublin yesterday afternoon, it began to rain. Within minutes, what was a light shower, quickly became torrential and I had forgotten my umbrella. In the midst of searching for shelter, I crossed paths with a man who appeared to be homeless and was asking passers-by for their loose change. Reaching into my coat pocket, I had less than one euro in coppers and apologised for the small amount but placed the coins into his polystyrene cup.

As I continued my fast-paced walk, I heard someone calling ‘Love, love, love’ from behind me. I turned around and the man who I had just given money to was trying to gain my attention and was asking me to come back to where he was sitting on the concrete. He asked me if I had an umbrella and having explained that I’d left mine in college, he offered me a navy teddy-bear umbrella; one of the very few possessions he had on his person. I refused and said that I couldn’t take it from him but it fell on deaf ears. He told me that the rain was too heavy and I would get sick if I was walking around in it for much longer. He placed the umbrella in my hand and merely asked me to return it the next time that we run into each other

I was completely flabbergasted. I asked him his name, introduced myself and shook his hand. The rain continued to worsen and as I raced back to college, I could not help but think of how cold and wet that man must now be. Two hours later, the weather cleared and Dublin experienced some brief sunshine. With the umbrella and a thank you card in-hand, I meandered back to the location where I first met him and luckily, he was still there. Shaking his hand, I thanked him for his generosity and incredible kindness. His response? You’re welcome.

For What It’s Worth (Millie Mélange) “Seen on a cash machine at work today…” The Japanese script on the box gives the dog’s age as sixteen.

The owner’s affection speaks for itself. A promo for the Love Everybody charitable fund.