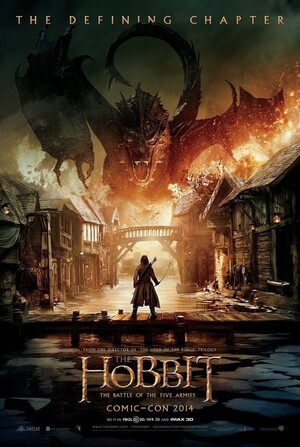 1. The third and ultimate instalment of the re-released Hobbit (1977) films has arrived. The armies of Men, Dwarves and Elves must reluctantly unite to defeat the Dark Lord, Sauron. We get a full trailer this time after getting teased back in July.

2. The entire film is only six weeks away and cutting a new trailer is a pain. Those wonderful few minutes after the ads and before the Interstellar and Hunger Games films begin playing in the cinemas anyone?

3. We read The Hobbit for Junior Cert English. We don’t remember any of this messing. Is a plot addition the same as a plot deviation?

4. This part of the trilogy features an epic 45 minute long battle scene. That’s a lot of handbags.

5. The Hobbit is the most expensive trilogy ever filmed. It had an estimated budget of $150 million per film but it is rumoured to have come in at north of $745 million for the three.

6. But don’t fret for Warner Bros just yet. The first part made $1 billion worldwide and the second raked in $958 million. Just see it through to the end folks.

7. Remember 48 frames per second? So does Youtube. It now supports High Frame Rate trailers like this one.

(Delboy is watching the telly. Dylan is Tom Dillon, a farmer/Broadsheet writer hybrid)

2 thoughts on “Broadsheet Trailer Park: The Hobbit: The Battle Of The Five Armies”