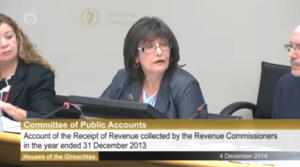 28 thoughts on “Meanwhile, At The Public Accounts Committee”