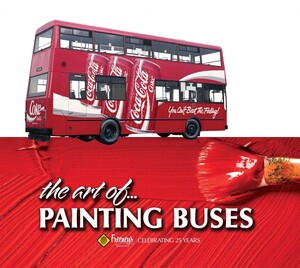 Stop messing at the back!

The Art Of Painting Buses is an Xmas stocking filler from  the signwriters at Freeney’s Graphics (Tallaght, Dublin], who have been painting Dublin buses for more years then they care to remember (approx 25).

Limey Tank: “On a Nitelink home, some extremely drunk young lads got on the bus having robbed napkin holders and the huge straw holders from Burger King. One of the lads got sick on the floor and there was much groaning from the other passengers. One of his buddies took a single napkin from the huge holder under his arm and dabbed daintily at the corners of his friends mouth. To everybody’s surprise they went to work cleaning up and the mood on the bus lightened considerably.
“A few minutes later, the same chap went green again. This time he grabbed the straw dispenser dumped the straws and got sick into it. Some wag from the back of the bus shouted “Would you like a straw with that?, much to everybody’s amusement. Then I got off the bus at the wrong stop and had to walk for ages.”

Noel: “in 1993, I worked with a man in his 50′s that had never driven into Dublin city. On his return to work, he was asked how he got into the city centre. On the N4, he spotted a Dublin bus with the sign for city centre at a stop, he pulled over in front of the bus, and waited for the bus to continue. He then proceeded to follow the bus, pulling in every time the bus did. After 4-5 stops, the bus driver gets out to find out why is he been followed. the bloke in the car near sh*t himself, not thinking he might be acting suspiciously, tried to explain that he didnt know way to the city centre.”

Noel: “I used get the dart to school so when I made it to college I had to change to the bus. I obviously got the bus 100′s of times before, but never to college. It was my first day, I was all excited to meet new people, meet girls, act like a grown up etc. I got to the bus stop and only then did I realise I didn’t know the fair. I walked onto the bus with a handful of coins:
Me: I’m going to UCD
Driver: (in a droll monotone) Congratulations.
He laughed, the people around me laughed, I blushed. Every day (well, when I made class during his shift) for the following few years I got a ‘UCD?’ question off him. Top man!”

Big Mad Bond Fan: “When I was 16, I used to go into town on the bus and I would pay the child fare (under-16s). The driver never questioned it. One day, the inspector got on and looked at my ticket and looked at me and looked again at my ticket and looked again at me. Then he said “How old are you?”. I thought quickly and said “I’m 16 today”. Technically, I hadn’t told a lie. The fact that I had been 16 the previous day and would still be 16 the next day wasn’t mentioned by me and he didn’t think to ask. He said “Well, from tomorrow on, you need to pay the adult fare”. And I did!”

The Art of Painting Buses will be available next week.

“We are setting a website for the book with a PayPal account, etc. and are expecting a delivery of the book next week around December 15th….”

Dream A Little Team For Me

I Deserve To Drive A WWII Tank Because

6 thoughts on “All Aboard”