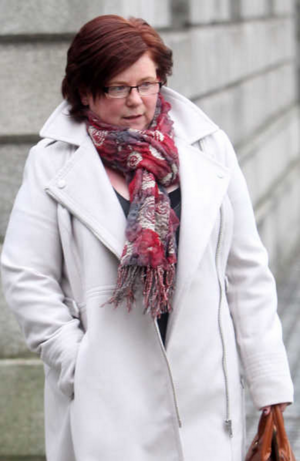 Marie Farrell arriving at the High Court on Wednesday

Marie Farrell in tears in High Court. Says Gardai bullied her children when she withdrew false statements against Ian Bailey. More at 12.30

“Marie Farrell has said her teenage children were punished by gardaí after she admitted making false statements about Ian Bailey. The shopkeeper from Schull, Co Cork has told the High Court she met with the journalist 9 years ago to apologise for the claims she had made about him during the Sophie Toscan du Plantier murder investigation.

“Her garda statements place the 57-year-old on a bridge near the scene early on December 23, 1996. An emotional Marie Farrell said her 13-year-old son was followed around Schull by a garda who told him: ‘I’ll do you’.

19 thoughts on “Meanwhile, At The High Court”