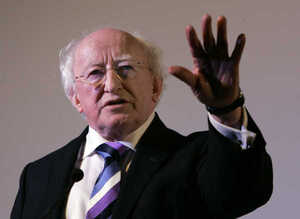 Or wiry ball of steel?

just as a counter to all the false indignation at our President being called a ‘Parasite midget’, don’t forget Michael D is no strange to the odd bit of verbiage [above]…

The president has shouted more pitiful epithets [at protests] than most of your ‘shocked’ readers have had lost bikes….