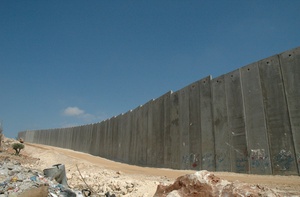 Outside a Palestinian refugee settlement in Jersualum

But the rest is chain-link.

[author and former diplomat] Eamon Delaney‘s book review for the Irish Independent of one author’s experiences in the Middle East does not appear at first sight to be contentious.

However, it includes the following statements:

‘Her first [Dervla Murphy’s book], entitled A Month by the Sea – Encounters in Gaza, described conditions in the crowded Mediterranean strip of Gaza, which is surrounded by Israel, run by Hamas and sustained by smuggling.’

Gaza is not “surrounded by Israel.” It also has a border with Egypt, which is also blockading the Hamas-controlled Strip.

Referring to the West Bank/Judea & Samaria, Delaney states that the territory is:

‘Surrounded by a huge wall and chopped into zones by the Israeli military.’

Except the area is not “surrounded by a huge wall.” Firstly, considering the territory borders Jordan, it cannot considered to be “surrounded.” Secondly, Israel’s security barrier is not a “huge wall” but is over 95 percent chain link fence.

As for the statement that the territory is “chopped into zones by the Israeli military,” this is also inaccurate.

Later, in what we hope is simply a careless typo, Yad Vashem is referred to as “the holocaust museum.” The Holocaust is commonly and correctly spelled with a capital “H” to affirm that it refers to a specific and unique historical event. To spell it with a lower case “h” is simply incorrect and in doing so makes the Holocaust of the Jewish people indistinguishable from other historical genocides.

Ultimately, Eamon Delaney’s book review is an example of how careless and inaccurate language can subtly alter even a relatively neutral piece of writing concerning Israel.

Irish Independent Gets Careless With the Facts (HonestReporting)

Dervla Murphy on life on the ground in the West Bank (Eamon Delaney, Irish Independent)

Bring A Bear Show You Care