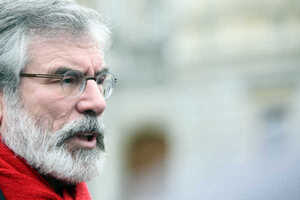 Gerry Adams went on Drivetime on RTE Radio One last night with host Mary Wilson pressing the Sinn Féin President on what exactly his and his party’s ambitions are.

Mary Wilson: ““Where do you see yourself, and your party, in the last year before a General Election?”

Gerry Adams: “Well, you said should a debate necessarily involve Fianna Fail, of course it should involve Fianna Fail, it should involve all main political parties, all the political parties should have their say in these matters. I agree with Micheal Martin about two things, one is that the Taoiseach is notoriously shy about debate. He won’t do it in the Dail, he does his set pieces, he’s very well handled by his very very well paid advisors, and, secondly, when Micheal Martin says that Fine Gael and Labour are implementing Fianna Fail policy, then he’s 100% right, that’s exactly what they’re doing, and that’s why Fianna Fail has no real alternative to offer in terms of the austerity-driven, narrow view of the huge price being paid by people on hospital trolleys, children, young people being scattered throughout the world, public services being destroyed, Fianna Fail helped to bring all of that about, Sinn Fein is of course putting forward an obvious alternative, it’s pro-public service, pro-business, pro-a United Ireland view, and we think that the debate should encompass all of these opinions.”

Adams: “No, I’m not, I don’t see myself in that way at all. I think there are two phases to the next period that we’re in. We’re first of all in a period of great flux in Irish politics, a lot of people have turned away from the old two-party dominated State that we’ve had since partition. So what are the two phases, number one, Sinn Fein wants to persuade as many people as possible to give us a mandate for government and then, depending on the strength of that mandate, we want to negotiate out a programme for government which will be about a fair recovery, which will be about bringing the jobs, rebuilding public services, rebuilding the damage done in the first place by Fianna Fail and then further damaged by this Fine Gael and Labour coalition.”

Adams: “But of course, of course we want to lead government, but, we have to be humble about this. You see, the election, Mary, is the people’s day, and some people are turned off because of all the promises that have been made, particularly in the last…”

Wilson: “People need to know what they’re voting for as well, Deputy Adams.”

Adams: “Of course, of course. That’s why the type of debate we need is one which is inclusive. What Micheal Martin was trying to do was to reinsert himself into the debate, because basically there is two main opinions here, one is the opinion of Sinn Fein for a fairer society based upon decency and equality, and then there’s the other, the view which is polarising society, which is opening up the gap, at the moment there are a number of people in jail, some of whom, I understand, are on hunger strike, we don’t have the same attitude to those in the upper echelons who created the mess that we’re all in.”

Wilson: “But in terms of another general election, what is your pitch? Because I think we heard Micheal’s Martin’s pitch this morning, it was a pitch for power.”

Adams: “Yes and we want to be in power.”

Wilson: “But I’m not sure you do, do you want to be Taoiseach?”

Wilson: “Who will you negotiate with?”

Adams: “And then we will work out…”

Wilson: “Who will you negotiate with? The others who want to be in power with you, who are they?”

Adams: “And that’s why I say, two phases. Phase No 1, get the biggest single mandate possible for a genuine republican government, which will set about…”

Adams: “But Mary, I’m avoiding that question because it’s not a matter of me being arrogant enough to think before even a vote is cast that I’m going to go about saying that I want to be Taoiseach. I want our party, the Sinn Fein party, to get the largest vote possible for change, I’ve also ben advocating a Charter for Citizens, the principles which would underpin a fair recovery, that’s where our focus is, our focus is on reaching out to those people who have, I think, seen that the conservative policies of Fianna Fail and Fine Gael are not working except to the advantage of the elite. We want to defend rural Ireland, we want to move forward on the basis of using the surplus, using the wealth, to rebuild the public service, we want to continue with the work of the Good Friday agreement and move towards Irish unity.”

Adams: “A clear programme, so who leads us, if we get that mandate, and who we do business with, will be what the people say.”

Adams: “No, we’re not the Irish Syriza, we’re the Sinn Fein party, a historic party which bases our values on the core values of the 1916 Proclamation, so were a party which has a very very firm objective of uniting people of this country, we believe in citizens’ rights.”

Wilson: “Are you a party of the left?”

Wilson: “Okay, are you a party of the left?”

Adams: “Yes, broadly speaking we are. But, there are people in our party who might not necessarily subscribe to a socialist view of the island but who do believe in a real Republic, we haven’t got rid of partition yet, there are people in our party and in all the parties if I might say so who want to see an end to partition but our party is the only party which is going to drive with others a way forward to ending partition and you won’t get a real republic unless you get the right of partition, so it’s all about a citizen-centred, rights-based society, so I suppose what we have at the moment, complete inequality and a deep chasm between people who would have normally seen themselves as relatively well off and now they’re in dire straits and those who are in the upper echelons, the people the Taoiseach was appealing to at his party, he doesn’t even call it an Ard Fheis any more, his party conference.”

Wilson: “Based around what you’re articulating there about where your party would like to bring our country to, could you agree a deal on these issues with Fianna Fail or Fine Gael or the Labour party?”

Adams: “Well, I think, I think some of the policy difference between us and some of those other parties would be too deep and too wide for us to bridge.”

Adams: “But I can tell you we will not do what Labour has done. We will not go in as a junior partner into a coalition led by a conservative government, that would destroy our national project, it would betray the people who would be be voting for us and it would be totally and absolutely counterproductive. Mary, you have to judge Sinn Fein on the changes that we, with others, have been able to bring about, in this part of the island, but also, particularly in the last thirty years, in the North.”

Adams: “Well, Ian Paisley used to say no, he used to say it quite a lot. Fine Gael, Labour, Fianna Fail all presided over regimes at different times, that censored republicans, that didn’t recognise our mandate. We will only go into government if there is a mandate, in the first instance, to go into government and if we can negotiate a programme for government that will fulfill the mandate. We will not tear up our mandate, we will not tear up our manifesto, and leave our principles outside the door out of a cabinet room. Let’s see what comes up in the mix, there’s a huge opportunity for people who have had their eyes opened by the last ten, or fifteen, or twenty years of bad politics, that those people seize the opportunity to make the change and vote for Sinn Fein, and what the Taoiseach should do, Mary, why doesn’t he call an election, let the people have their say. He says Paddy wants to know, well Paddy, and Patricia, should have the chance as soon as possible to vote.”

50 thoughts on “What Gerry Wants”