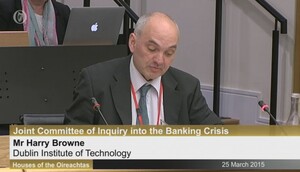 Card-carrying Journalist, acclaimed Bono biographer and DIT lecturer Harry Browne appeared at the banking inquiry  to discuss the media’s role in the the boom and bust.

In his opening address, Mr Browne, formerly with the Irish Times, argued that by putting advertisers above readers newspaper editors had managed to lose the respect of both. [full text at link below]

Print and broadcast media in Ireland played an immeasurable but almost-certainly significant role in the inflation of the property bubble and the legitimation of risky behaviour by the financial-services sector in the lead-up to the crisis of 2007-08, and did so partly by ignoring or marginalising scepticism about these phenomena.

I won’t romanticise the journalism of an earlier age, which had plenty of its own problems, many of them involving the limits and shortcomings of professionalism itself. However, over the last 30 years or so these principles are widely understood to be increasingly at risk all over the world, with particular features of the media landscape endangering them.

As the leading American scholar of journalism Daniel Hallin has written: ‘For the most part I don’t think journalistic professionalism is breaking down from the inside, by journalists becoming less committed to it; instead I think professionalism is being squeezed into increasingly smaller niches within the media field’

It is my contention that in Irish newspapers we can quite literally see that ‘squeeze’ occur over the period between about 1990 and 2007, as the physical construction of newspapers changed. There was a inscription of an unquestioning pro-business ideology and practice on to increasingly large, advertising-heavy proportions of the newspaper – with ever-growing business/finance, property and lifestyle sections, dedicated to the advertising of, respectively, recruitment, real-estate and consumer goods and services.

Even the most scrupulous of newspaper editors came to see those sections as a realm of, at best, what you might call ‘Professionalism Lite’, where soft treatment of the rich and powerful was expected.

Even if you worked in the niches where full-blown professionalism still held sway (the journalists who filled news pages and provided political coverage, for example) it was hard to miss the message embedded in that big, colourful product about your employer’s relationship to financial institutions, property interests and other corporate bodies.

Those supplements were, after all, paying the bills. When Irish Times Ltd infamously paid €40 million for myhome.ie in 2006, it appeared to confirm its dedication to what increasingly looked like its core business: advertising property sales.

This has obviously consequences, of course, for the newspaper’s capacity to deal impartially with subjects such as the desirability of property ownership over other forms of tenure, or the related question of the ‘soft landing’.

A group of Irish financial journalists, speaking on condition of anonymity to a team of academic researchers who published their findings in 2010, discussed this issue.

One of them said: ‘Much of the mainstream media seems to me to be very conflicted because of their reliance on real-estate and recruitment advertising. That doesn’t mean reporters consciously avoid writing bad news stories, but it’s hard to run against the tide when everyone is getting rich.’ Another stated that journalists ‘were leaned on by their organisations not to talk down the banks [and the] property market because those organisations have a heavy reliance on property advertising’.

In 2006 I myself interviewed dozens of journalists about the direction of the Irish Times.

One of them, retired from the paper, said: ‘In the mid-1980s… we had a series investigating the truth behind buying and selling property. Can you imagine that now?’ Even in the 1980s, he recalled, ‘[t]he commercial side of the paper [i.e. those who sold advertising] were in complaining like nobody’s business’ about the series; but the then-editor, Douglas Gageby, ‘stood up to them’.

The idea that certain, then-small parts of Irish newspapers were professionally compromised territory, however, was already in the air as early as the 1980s.

A former business editor from Independent Newspapers recalled a lunch from that period where journalists and brokers gathered to mark the appointment of a new president of the Irish Stock Exchange:

The lunch went well and all the proprieties were observed, until, during the port, the topic of mutual dependence came up in the conversation. ‘What do you mean, mutual?’ a rubicund and slightly tipsy broker ventured. ‘The business pages are ours. We own them.’…

…By the time of the Celtic Tiger, this compromised turf of business and financial journalism had expanded many times over both in the volume of pages produced and in the number of journalists employed. In that important and revealing research cited earlier, the authors summarise the views of several of the Irish financial journalists they interviewed:

According to Journalist F, because of the need for regular contact with financial sources, ‘some journalists are reluctant to be critical of companies because they fear they will not get information or access in the future’.  Journalist E… believed that some journalists had become ‘far too close to their sources’: They viewed them as friends and allies and essentially became advocates for them.

Their approach was justified editorially because many developers and bankers limited access to such an extent that it became seen to be better to write soft stories about them than to lose access.

Extremely soft stories would be run to gain access too…. Journalist B criticised daily financial journalism for being ‘almost entirely press release and stock exchange disclosure based’…. Journalist F noted, it was ‘well known that some PR companies try to bully journalists by cutting off access or excluding journalists from briefings’.

Many of the Irish journalists interviewed for that research said the business media here had become more adversarial since the crash. However, in research among British journalists in the aftermath of the financial crisis, a study found there was ‘no consensus among financial and business journalists about their “watchdog” role in relation to markets and corporate behaviour’.

This sort of ambivalence, to put it kindly, about telling good, tough stories while maintaining source relationships is not unique to financial and property journalism. However, as the role and prominence of those sorts of journalism increased exponentially in the 1990s and early 2000s, their particular compromises of ‘professionalism’ played a proportionately much bigger role in newspaper coverage of these important areas of the economy and society.

Their growth was not inevitable, nor was it unique to Ireland. It was part of an international development in the newspaper industry that sought to diversify papers’ content and appearance to make them more attractive to advertisers and (to a lesser extent) readers.

Belmayne Revisited: Now A Ghost Estate But Then…

5 thoughts on “Bought And Sold”