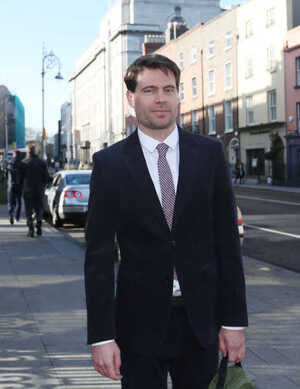 Dr Julien Mercille at the Banking Inquiry during the week

Dr Mercille, author of The Political Economy and Media Coverage of the European Economic Crisis: The Case of Ireland, discussed media collusion in the boom and bust.

How did that go down?

“… Chasing red herrings and matters of no consequence remains a risk when competing politicians from different parties gather in conclave.”

“This week, they devoted some hours to considering the views of some obscure academic by the name of Julien Mercille. He has cast himself in the role of being some kind of messiah when it comes to the media, and its alleged involvement with spiralling house prices.”

“When it comes to the foibles of newspapers, in particular, Mr Mercille seems to be an expert on all those ”unknown unknowns” which challenge lesser mortals. Such is the way of self-appointed gurus. However, his arguments suffer from one overwhelming weakness – I cannot recall him predicting the crash either.”

“Finding out why was never going to be easy, but the inquiry got off to a pretty poor start on Wednesday. Before newspaper editors, including the Irish Examiner’s Tim Vaughan, the first witness was an academic chap, Julien Mercille.”

“Dr Mercille lectures in the department of geography in UCD and is the holder of a Phd on ‘the political economy’. He has written academic publications on matters such as the war on drugs, but he is not a media academic, and has never worked in the Irish media. He has penned a book based on the newspapers’ coverage of the property boom and bust.”

“The thesis of his book is that the media is largely a tool of “the elites” and reflects their views at the cost of telling “the truth” or catering for “ordinary people”. It’s not clear whom exactly the elites are, but it’s safe to say Dr Mercille does not include among them highly-educated, well-paid and pensioned academics. Those souls are far more likely to be “ordinary people”, in search of “the truth”, whatever that is in a political context.”

“Dr Mercille’s thesis on the media derives as much from his political perspective as from any neutral examination of the function and performance of newspapers. His columns and media appearances suggest his politics chimes with that of the so-called far left, although Dr Mercille told the inquiry he would consider himself “progressive”, rather than left- or right-wing.”

“There’s nothing wrong with any of that. Diversity of opinion is a positive feature of public life. What is baffling is why an important Oireachtas inquiry, on a very tight schedule, found it useful to hear about the media from a man who could not be described as either a practitioner or an expert. Perhaps the politicians thought this passed for the ‘balance’ they habitually contend is lacking in coverage of their affairs.”

“Dr Mercille is a man of the hard left. In his hard-left worldview, capitalism is dominated by interconnected elites, who are in the minority, but because they wield all the power they are able to keep the majority poor and suppressed…..

Last year I was invited to debate the role of the media with Dr Mercille at a conference. In preparation for the event, I read his work carefully. His claims about the failings of the media during the bubble period are based on articles which appeared in this newspaper, the Irish Independent, the Irish Times, and episodes of RTE’s Prime Time. He claims that when this output is analysed it shows a highly unbalanced picture of cheerleading for the boom and only a tiny amount of time and space given to dissenters.

Interested in analysing his evidence, I contacted Dr Mercille and asked him to share the database he had collated. It turned out that he had not gathered the data in the normal way that any rigorous academic would do, so that the findings could be replicated, tested and built on. As such, it is not possible for anyone to know what was included in his study and – probably more importantly – what was not included.

The issue of what is not included in any study is important because it is the most common fault found in academic work.

As Dr Mercille’s evidence base is not available, it is impossible to assess the accuracy of his study, but there is reason to question it.”

A former Irish Times journalist,[Harry] Browne’s assertion that the media were “property porn” cheerleaders for choosing to feature property programmes and lifestyle features, distinctly smacked of poacher turned gamekeeper. The architectural nerd in me enjoys watching property, interior design and restoration programmes. I like watching cooking programmes too. Perhaps we should blame them for rising obesity levels? Or blame travel programmes for inspiring wanderlust?
Browne’s peer, UCD academic Dr Julien Mercille, was no more enlightened when he suggested that journalists could have predicted the property bubble and the crash itself. I anticipate a much more intriguing week this week, as the focus shifts to estate agents and their role in the bubble.

Geraldine Kennedy: “I listened to Dr. Mercille with great interest yesterday. Without doubt he was the finest conspiracy theorist I have heard in a long time. I was disappointed that his material was not evidence based. He gave one fact in his submission which was that there 40,000 articles written in The Irish Times about economic policy and the property boom and only 78 about affordable housing. That is absolutely wrong. It is very easy to press a button and get “property bubble” without taking into account all the other formulations of expressing that same phenomenon. Between the years 2008 and 2013 the country was banjaxed, it was bankrupt. Unless we want it to be Greece, one had to try to bring the country out of the mire. I noted yesterday that he seemed to support Argentina and in something else I read about him he supported—–

Deputy Joe Higgins: “Does Ms Kennedy dispute the figures and the percentages that he outlined in terms of the support for…”

Kennedy: “No. I do not know but I would be surprised.”

Higgins: “But Ms Kennedy said that his contribution was not facts based and
now she says she does not know.”

Kennedy: “I do not know as I did not study that period because the terms of reference of the inquiry given to me were for 2002 to 2007. His figures were for 2008 to 2013 which is beyond my period as editor and I did not study that before coming in here. I will say that I believe, personally, and would probably have pursued the policy as editor, that there was very little option for Ireland unfortunately but to try to get its house back in order. It required great sacrifices by ordinary people.”

Higgins: “Yes. In other words, Ms Kennedy supports it. Did she support then the bailout of the financial markets rather than the people who were victims?”

Higgins: “How is that balanced journalism?”

Chairman: “I am going to move on.”

Michael Clifford: We all had the economic blinkers on (Irish Examiner)

30 thoughts on “Don’t Hate Him Because He’s Beautiful”