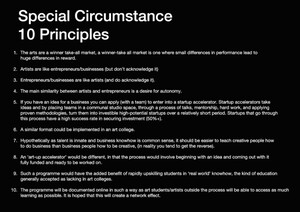 So with NCAD being in the news and all that here’s something that suddenly has become somewhat topical.

Firstly I see some articles about students questioning the worth of their degrees, this is a good question, I was asking it ten years ago, back when the college was (relatively) flush with funding, but students demanding essentially the same education I got, frankly aren’t being demanding enough.

Speaking to staff and students over the years you hear two types of problem, old ones and new ones, it’s the new ones that have captured the ire of the moment, but it’s the old ones that grate the most, as they are specific and particular to art college itself.

So here’s a proposition, based on experience of art college (including a year in the Union), the art world, a few trips around the entreprenurial ecosystem merry-go-round, research, experience etc.

I gave the talk (above) in October 2014, sketched out the programme over the Summer after hearing the same old complaints, but worse, from people in the place.It remains, to my mind, very doable (2016 anyone?)

It’s essentially an ‘art-up’ accelerator, but that’s a horrible term to call anything so I call it ‘Special Circumstance’ instead (little tribute there to Iain M. Banks).

Would be interested to know what YOUR READERS think of it as a concept (yes I know it’s a bit on the long side, but it does contain jokes, some by a famous comedian), you can skip the intro stuff at 3.13 (unless you want to hear the very nice Dr. Paul O’Brien say some very nice things or see me swear a few times trying to get the projector to work).

Previously: Supporting The Students of NCAD

Albert, Ernest and the Titanic

42 thoughts on “The Worth Of Your NCAD Degree”