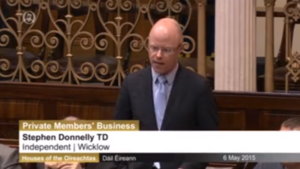 Last night – before Independent TD for Kildare North Catherine Murphy gave her  contribution to the Dáil debate on the sale of Siteserv – Independent TD for Wicklow and East Carlow Stephen Donnelly and People Before Profit TD for Dun Laoghaire Richard Boyd Barrett also had a few things to say.

Stephen Donnelly: “Public trust in the political system in Ireland has collapsed and tonight’s debate is a perfect example of why that has happened. The only reason an investigation is being conducted into the sale of IBRC assets is because of the work of Deputy Catherine Murphy. The motion before the House concerns who should conduct that investigation but serious questions of political governance must also be investigated. Why did the Minister make no mention of his Department’s concerns in response to numerous parliamentary questions from Deputy Catherine Murphy? Did the Minister inform the Taoiseach, the Economic Management Council or the Cabinet about his Department’s concerns?”

“If departmental concerns about this serious issue have been kept secret, what else has been kept secret? What other parliamentary questions have been avoided or fudged by the Minister? If these concerns are worthy of investigation, and they are, why is it only being done now, years after the Department raised its concerns? I will tell the House why. It is because the Minister’s cover-up has failed and he has nowhere left to hide.”

Ceann Comhairle Seán Barrett: “The Deputy cannot make an allegation of a cover-up. I ask him to withdraw it.”

Donnelly: “I will withdraw the allegation of a cover-up – heaven forbid.”

Donnelly: “The motion before the House condemns the appointment of KPMG to undertake a review of transactions in IBRC as it advised Siteserv during the sale. The Government amendment acknowledges that and states that the sale process was run by Siteserv along with its advisers KPMG Corporate Finance and Davy Corporate Finance and calls on Dáil Éireann to support the review, which KPMG has been directed to conduct. It is extraordinary stuff. In essence, KPMG is being by the Government to investigate itself. This is not a perceived conflict of interest. It is the definition of a conflict of interest. The Government should ask KPMG to step down and appoint a person or organisation who was not involved in the deals under investigation. Should the Government refuse to do so, KPMG should take it upon itself to step back from this situation.”

Richard Boyd Barrett: “The context for this debate is what happened to ordinary citizens in this country in 2012. When some of us on this side of the House screamed in opposition to the vicious cuts imposed, particularly in budget 2012, that hit the most vulnerable people and when many people in this House asked in the same year whether the unsustainable debts of tens of thousands of ordinary mortgage holders who were just trying to keep a roof over the heads could be written down, we were told this could not happen under any circumstances because there would be moral hazard associated with doing it. At the same time that ordinary people were being told that they could not have their debts written down by the banks we had bailed out, those same banks were writing down the debts of companies to the tune of hundreds of millions of euro and to the benefit of some of the richest people in the country, including the richest person in the country. There were three or four different deals from which he benefited to the tune of hundreds of millions of euros in writedowns paid for by the taxpayer.”

“Concerns expressed by the Minister’s Department on foot of questions raised in this House at that time were simply covered up in the sense that the Minister did not bring those concerns to the attention of this House even though his own Department was saying it had concerns. Why has it taken years to drag this out of him instead of a Government that is supposed to be in favour of transparency coming before the Dáil and saying it had big concerns about what was happening with these writedowns? Why did the Minister not do that? This raises suspicions from the word go. When the Minister was finally forced to accept that there was something to look into, he got the insiders to do it. These are the people who were involved in this dubious sale – KPMG. It is unbelievable. He is asking people to investigate themselves. How can he seriously expect that to be a serious investigation?”

“Government Deputies piled into the Oireachtas Committee on Finance, Public Expenditure and Reform today to oppose a motion I put down that stated that the committee should ask some of the key players to come before it to answer questions. The Government does not want that either. Instead, it wants the insiders involved in the deal to investigate themselves. This is a joke and stinks to high heaven.”

Sean Barrett: “I am now calling on Deputy…”

Boyd Barrett: “I am not. Government Deputies piled in and then…”

Twomey: “He cannot even tell the truth.”

Paul Murphy: “Is it not unparliamentary to accuse people of lying?”

Twomey: “In respect of the charge made by Deputy Boyd Barrett against the Government, it was explained quite clearly to him and I will not repeat it in the Chamber because the committee was discussing a matter in private session. He knows exactly what the reasons were and that they had nothing to do with Government Deputies piling in.”

Boyd Barrett: “I do not accept the reasons and the Government Deputies did pile in.”

Twomey: “If we use the Chamber to just throw wild accusations around, we will have a very poor quality debate in this House. If I came in and started accusing members of Sinn Féin of being involved in things because they happened to be associated with other things, it would not go down too well either.”

Mary Lou McDonald: “It happens regularly. There is nothing new there. Apparently, it is not a breach of privilege either.”

Twomey: “No, because we have not accused it of anything even though it is always taking exception to something so perhaps I have hit a raw nerve. Opposition Deputies are not clear what they want from this debate. They said today that they are looking for an inquiry to be carried out by the Oireachtas Committee on Finance, Public Expenditure and Reform.”

Boyd Barrett: “I did not say “inquiry”.”

Twomey: “They want an inquiry carried out by the committee over the next number of weeks. We now listen to them saying that they want a full inquiry, which they know will take at least two or three years. They should make up their minds if they are really serious about telling the people of Ireland that they offer credible opposition. What in God’s name do they want to offer them because right now that stands for nothing? It just stands for populist, ranting one-liners that possibly work for them but they certainly do not work when it comes to delivering a proper sense of governance for this country. We can decide that we do not want a rapid inquiry that will deliver by the end of August and that we want an inquiry that will go on for over three or four years, like those we were used to in years gone by, and that would probably report back to some Dáil in the future when we are all long retired.”

Finian McGrath: “That is not what a commission of inquiry is about. It is short and snappy.”

Liam Twomey: “Opposition Deputies need to make up their minds. The way a few parliamentary questions in 2012 are forgotten by the Opposition and the sudden righteous indignation in this Chamber undermines how we should go about our work. If there are serious issues here, we need to have a quick inquiry to look into them and, if necessary, move on to a much deeper inquiry. To stand up here and just throw out accusations against people undermines the entire process. Does Deputy Paul Murphy think that every official in the Department of Finance is a crook?”

Twomey: “Just the ones who deal with IBRC? It is so easy to throw it out. Opposition Deputies do not know what they want. They do not know what type of inquiry they want. Their accusations are shocking. It is shocking how easily they accuse people and throw their names out with no regard. Deputy Finian McGrath talks about trust in the system. Does he seriously think that trust in the system results from throwing around accusations in the Chamber knowing he is protected by parliamentary privilege?”

McGrath: “I did not throw out any accusations.”

Twomey: “It is really shocking. I have listened to this debate.”

McGrath: “The Deputy is living in cloud cuckoo land.”

Twomey: “Obviously, I am clearly hitting a raw nerve with somebody here and they realise that the quality of the debate is no better than the 24-hour news cycle.”

Last night: Bringing Down The House

22 thoughts on “‘The Minister’s Cover-Up Has Failed’”